What's the composition of gun smoke and is it dangerous?

I've been conducting an informal (i.e. mental) risk assessment of visiting gun ranges. There are a couple of obvious sources of hazard:

The first one is addressed by the fact that you should assume every gun to be loaded until personally convinced otherwise, and to always keep it pointed at the target area when handling the weapon. The second and third points are addressed by safety measures such as wearing ear and eye protective equipment. The fourth one is kind of a wildcard, because you would assume that people who go shoot guns in a range are professionals with training. This may not always be the case, and statistics of that should be taken into account in the final verdict of the risk assessment, but I will ignore it for the time being.

Suddenly, I was struck by the idea that guns also may pose a respiratory hazard. The smoke that is formed has a distinct smell, possibly combined from the lubricant on the gun and the combusted propellant of the bullet. What exactly is this "gun smoke" made of, and should I be concerned for my health in this regard?

An image to show what this gun smoke can look like (Source: Arizona Sonora News): 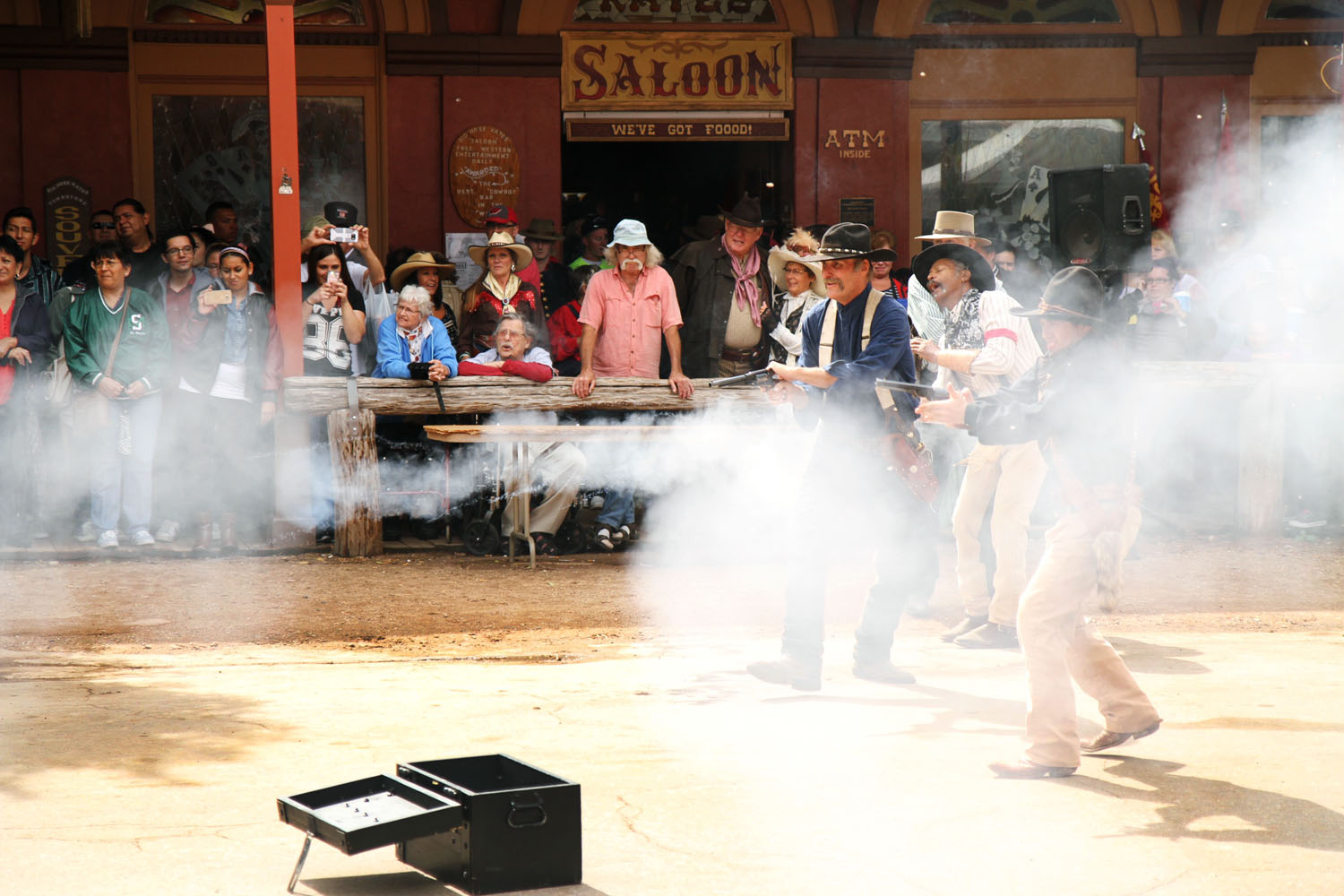 There is an additional level of concern when handling even larger payloads than a simple 9 mm bullet, but the documentation may be restricted and as such I do not require an answer to the following question: Are there any requirements for military personnel operating cannons and other large artillery to protect their airways from the fumes?

Toxic smoke from propellant combustion has been known about for over 500 years.. The propellants used today are Nitrogen based, thus nitro glycerin, nitrocellulose and nitroguanidine . These produce gases containing oxides of nitrogen, carbon oxides, carbon monoxide, hydrogen cyanide, ammonia and several other gases.. The oxides of nitrogen can be inhaled deeply into the lung thus causing damage as deep as the Alveoli, thus causing bronchiolitis obliterins resulting in a "Pulmonary Edema". This can happen 5 years after exposure.. If you show signs within 24 hours of exposure then oxygen and Arterial Blood gas tests are the solution to treating the condition and knowning the effect. The symptons show just like influenza but no sign of virus. This is known as an Acute Toxic Smoke Inhalation Injury. WW1 and WW2 this was studied to reduce the effect on gun crews on both land and sea. It is still a problem today with Armoured vehicles and Artillery and one of the reason the Navies use unmanned turrets. Look up this file and you will find quite a bit of information about this condition.

Occupational Health - The Soldier and the Industrial base

I had first hand experience of this injury in 1988 and am still alive to tell my story, I had a "Pulmonary Edema" in 1991 and survived that, so I am in the 2% of survivors from that period. In the mid 1990's they discovered how to treat a pulmonary edema thus it has increased the survival rate.

There is thousands of pages of information on this subject, just look for "Propellant exhaust gas exposure" or "Toxic gas inhalation" that will bring up more information.

The military threshold limits are higher than civilian but a tank will expose the crew to 1,300 the TLV for less than 5 minutes if the fume extractor is working. In my case it was not!

Potential health issues associated with the immediate exposure to toxic propellant gases have been addressed above by Webber GK.

However, a review of the biochemistry literature does suggest that there can also be long-term consequences from radical-induced illness to the lungs (in particular, see this source, as an example) which may also be a concern here.

As a foundation, I start by looking at the decomposition products likely generated from the discharge of weapons. Starting with gunpowder, per a source:

Gunpowder...consists of a mixture of sulfur (S), charcoal (C), and potassium nitrate (saltpeter, KNO3). The sulfur and charcoal act as fuels while the saltpeter is an oxidizer.[1][2]

A simple, commonly cited, chemical equation for the combustion of black powder is:

A balanced, but still simplified, equation is[126]:

I suspect an unmentioned intermediate is sulfite which is converted to sulfate with air contact.

Next, per Wikipedia on Potassium nitrate, comments on thermal decomposition:

Likely more prevalent, however, is the use of smokeless powder alternatives, which includes nitrocellulose, $\ce{C6H7(NO2)3O5}$ where the more elementary decomposition product could add NH3, NO2 and even some HCN to the list.

Also, the primer employed in bullets is impact-sensitive lead styphnate ($\ce{C6HN3O8Pb}$). As such, I would expect its decomposition to yield CO, CO2, NO, NO2, Pb and water vapor. Also upon the interaction of water and nitrogen dioxide, for example, a possible acid mist:

The direct action of $\ce{NO2}$ on $\ce{NH3}$ may also be possible in the presence of $\ce{NO}$ at increasing temperatures.

To this visible gun smoke, I would add incomplete combustion products including C (as soot) and small amounts of Pb. Also, with the use of KNO3, several potassium salts (sulfide, sulfite, nitrite, sulfate). A largely confirming source given previously, to quote:

This chapter primarily considers the risks of exposure via inhalation, the skin, and the eyes to the major combustion products of commonly used solid propellants—carbon monoxide, ammonia, hydrogen chloride, oxides of nitrogen and sulfur, and lead—in army weapons systems.

However, a rifle’s barrel does wear down due to nozzle pressure and friction generated heat. As such, I would further add trace amounts of iron and chromium metal particles to the outgassing as well, where the presence of transition metals in the lungs could be critical to further reactions.

In particular, with respect to chemistry sourcing radicals (which could produce in time health issues), I start with Josef Prousek’s book "Fenton chemistry in biology and medicine" by, to quote reaction (15) on page 2330, a general depiction of Fenton-type reactions, to quote:

Assuming HOX could also represent, in the current case with NO2 creation, HONO formation.

Now, a corresponding possible reactions in the current context:

Further, in the human body, the presence of ascorbic acid is known to provide some recycling of ferric (and likely chromium/other transition metal) ions back to ferrous to keep a Fenton-type reaction active (as a reference, see, for example, 'Generation of Hydroxyl Radicals from Dissolved Transition Metals in Surrogate Lung Fluid Solutions' by Edgar Vidrio, at al.

The cited work by Vidrio notes oxygen and solvated electrons could lead to the creation of the superoxide radical anion, capable of reducing Fe3+ back to Fe2+, thereby promoting cyclic activity in the reaction system:

Where the possible creation of the powerful hydroxyl radical is problematic from a health perspective as it can extract a hydrogen atom from any organic (forming water), including DNA, potential leading to health issues.

Not the answer you're looking for? Browse other questions tagged safety combustion explosives or ask your own question.

3
What dangerous gases could electrolysis with water and sodium carbonate produce?
9
How do we get rid of dangerous explosive acetone peroxide and nitroglycerine?
1
Is mixing ammonia and bleach spray in the same parcel of air considerably dangerous to health?
5
Understanding smoke chemistry of tobacco and/or marijuana
0
What am I doing wrong with the fuel and packing I am using for a cannon I made?
1
How to determine the composition of a gas mixture after a combustion?