Is alcohol really a solution?

A friend recently sent me the following chemistry joke: 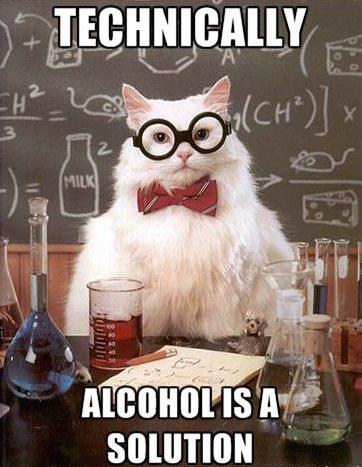 As a lover of puns, I'd like to enjoy it, but I think that it is actually false the way it is phrased.

A solution is defined as: "a homogeneous mixture composed of two or more substances" Alcohol alone would not constitute a mixture of multiple substances and would therefore not be a solution.

But in English the word "alcohol" is also commonly used to refer to many recreational drinks containing ethyl alcohol in addition to other types of molecules. Are there any common examples of alcoholic beverages which are solutions in the scientific sense that would make the pun valid, such as liquor, wine, or beer?

Technically, alcohol is the name of a class of organic compounds containing one or several hydroxyl groups.

Colloquially, the term "alcohol" is understood as you have described: A solution (of varying degree of purity) of ethanol and water. Pure ethanol is impossible to create via the traditional method of purification (atmospheric distillation) as the water-ethanol mixture is azeotropic:¹

An azeotrope [...] is a mixture of two or more liquids whose proportions cannot be altered by simple distillation. This happens because, when an azeotrope is boiled, the vapour has the same proportions of constituents as the unboiled mixture.

This is why a chemist would never think "100% pure ethanol" when you mention "alcohol".

If you check for example this vendor page for the purest ethanol (>99.5%) I could find, you see various substances listed as impurities:

Concerning your second question, I would argue that many distilled spirits (vodka, whisky, and cognac just to name a few) are solutions of ethanol, water, and various flavour compounds.

Some alcoholic beverages, such as unfiltered beer and wine, usually also contain solid particles and would as such be correctly termed "suspensions".

¹ I wonder now whether it would be possible to produce 100% ethanol from another mixture somehow. The problem is probably that every common starting mixture already has some amount of water. But synthesizing ethanol in, say, an ionic liquid under an inert atmosphere and then distilling it away might be an interesting approach.

Tschoppi’s answer is technically correct, since it is nigh impossible to create a pure compound without any contaminants. The highest-grade liquids I can remember seeing on SigmaAldrich’s web pages were something like $99.9999~\%$ purity or something — far enough away from $100~\%$ to call it a solution.

However in practice, chemists (especially non-physical chemists) would call any liquid phase that does not have substantial dissolved particles a ‘pure’ liquid — that would even include ‘just’ $99~\%$ purity. (As a general rule: The more organic or biological the chemist, the less pure ‘pure liquids’ are.) Some may even call the $96~\%$ ethanol (which is often traditionally labelled ethanol absolute — not to be confused with Absolut Vodka) a pure liquid and totally neglect the $4~\%$ water and other stuff in there.

So in a practical view, the questions remain:

The first is the difficult one. When in the lab, chemists may colloquially call ethanol alcohol — while some might also call methanol the bad alcohol or something. The word alcohol no longer describes a specific chemical (if it ever did) but rather, as Tschoppi pointed out, a group of chemicals that all contain $\ce{O-H}$ groups (and excluding the chemical if all its $\ce{O-H}$ groups come from acids). So the pun would probably fail in step 1 when we are defining alcohol.

However, if we do assume that a chemist would understand ‘the bottle labelled ethanol abs.’ (or whichever ethanol purity is most available) in a lab setting, then that chemist would most likely say ‘no, this bottle does not contain a solution, only a liquid/solvent/whatever.’ So the pun would fail at step 2.

Outside the lab, by the way, chemists would often talk about alcohol meaning alcoholic beverage — if they use that word in that sense at all. I don’t think any chemist (at least no-one I’ve met so far) would use alcohol outside of the lab to mean ethanol. If that is the case, then yes, the pun would work.

So all things considered, most of the time chemists would reject the pun for being either too simplified or wrong in a lab setting. However, given the correct set of constraints, they would accept it.

I would argue that these are mixtures, not solutions. A solution requires at least two different components. A solution might look like alcohol (being the solvent) that would take water (the solute) into solution, making $\ce{H+}$ cations and $\ce{OH-}$ anions. That would be an acid and a base, that would immediately turn back to water. That would never happen. The water molecules would just stay together in the first place. The fact is that it is a mixture, not a solution.

DfwsloanDfwsloan
1
$\endgroup$
Add a comment  |
Highly active question. Earn 10 reputation (not counting the association bonus) in order to answer this question. The reputation requirement helps protect this question from spam and non-answer activity.

9
Is sodium borohydride really a better base than an alcohol?
1
Dehydration of alcohol
1
Mixing alcohol with aluminum sulphate
0
Is 99% Isopropyl Alcohol sold in stores really 99%?