What is the difference between D and L configuration, and + and −?

What is the difference between D and L configuration, and + and −?

My textbook says they are two different things. It also says that the correct way to name glucose is D(+)-glucose.

Could someone please explain what D, L and +, − represent, and why they are different?

The D-L system corresponds to the configuration of the molecule: spatial arrangement of its atoms around the chirality center.

While (+) and (-) notation corresponds to the optical activity of the substance, whether it rotates the plane of polarized light clockwise (+) or counterclockwise (-).

In short, the D-L system doesn't have direct connection to (+)/(-) notation. It only relates the stereochemistry of the compound with that of glyceraldehyde, but says nothing about its optical activity. We may have compound with same relative configuration as (+)-glyceraldehyde (thus, it's given the D prefix), yet it rotates the polarized light counterclockwise (-), such as D-(-)-ribose.

D-L system (also called Fischer–Rosanoff convention) is mainly used for naming α-amino acids and sugars. It compares the relative configurations of molecules to the enantiomers of glyceraldehyde. This convention is still in common use today.

While d- and l- are synonymous with (+) and (-), respectively, as the signs of optical rotation in modern terminology, such was not always the case in Fischer's day (~1891). The designation (d)-glucose in many instances was equivalent to today's (D)-glucose while (+)-glucose referred to the sign of dextrorotation. Rosanoff (J. Am. Chem. Soc., 1906, 28, 114) revealed inconsistencies in Fischer's assignment of the "D-" and "L-" families of carbohydrates. Rosanoff introduced the δ-(delta) and λ-(lambda) series that have evolved into today's D- and L-series, respectively. 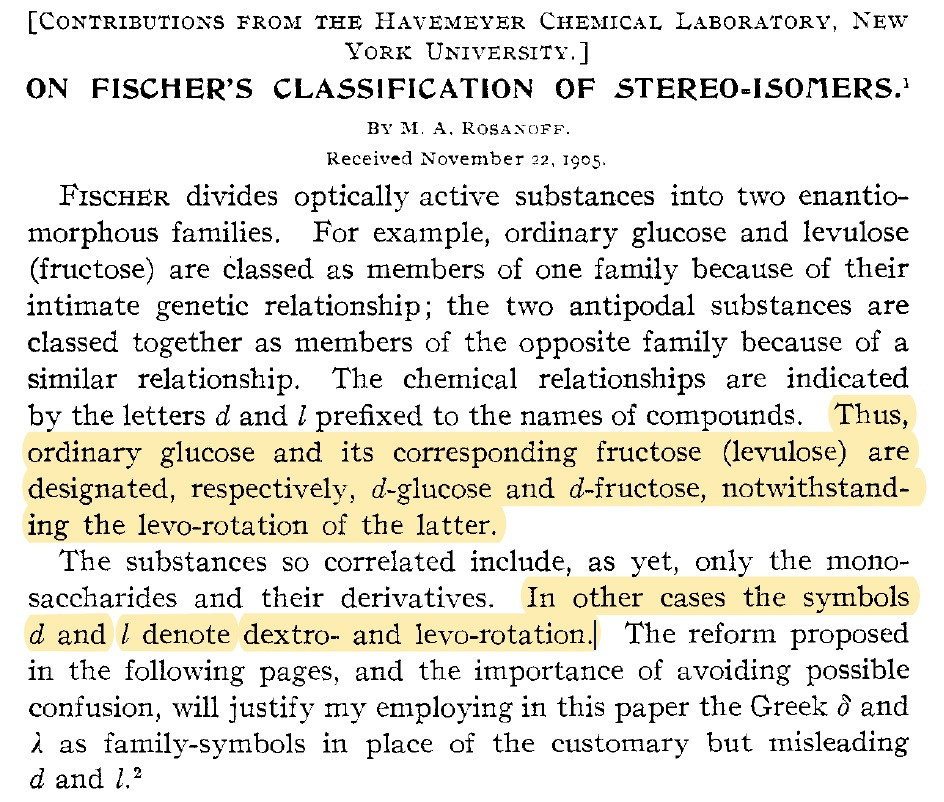 -2
Difference between L&D and S&R in naming
10
What makes enantiomers so special?
7
DL vs dl notation
6
Help understanding this passage on optical activity
3
D/L and +/− labels of glucose
1
ᴅ-amphetamine, ʟ-amphetamine

16
What's the difference between alpha-glucose and beta-glucose?
1
Nomenclature of methyl groups in an alkanol
1
Nomenclature of an Alkane
5
Energy of eclipsed and staggered conformations of ethane and propane
4
How to determine the configuration of an propargylic alcohol?
1
Why is it lead(II) chromate and not lead(II) chromate(VI) tetraoxide?
5
R and S Configuration Understanding
0
difference between glyceraldehyde-3-phosphate and 3-phosphoglycerate