I was trying to know what is the probability for the carbon atoms to rotate .I know that in single bond it is 0 % and I think it is 100 % in double bond but how about the triple bond ?

Actually, it's the opposite. Most Carbon-Carbon single bonds can rotate without much difficulty. Ethane, for example, has a (potential energy of conformer vs dihedral angle) graph like this:

The energy barrier isn't that much here, and ethane probably rotates without much effort.

Propane and all will have higher energy barriers, and will rotate less often. Even cyclic compounds like cyclohexane undergo ring flipping

However, not all single bonds can easily rotate a full turn. Systems like these:

have a hard time rotating about the central bond due to steric repulsion of the groups on the biphenyl system (which makes the two compounds shown above noninterchangeable). These systems can only rotate a small angle, and rarely go 360° (it may be possible to force this to happen by providing the system with energy).

And, of course, there are systems where it's obvious that there cannot be much rotation. For example, in bicyclo[2.2.2]octane, most bonds will rotate very little, and it is impossible for any bond to rotate a full 360° without breaking any bond. 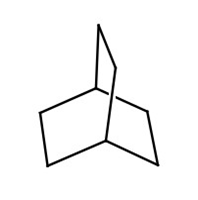 Now, single bonds can rotate because they are sigma bonds. A sigma bond is formed by overlap of one lobe of an orbital from each of the two atoms: 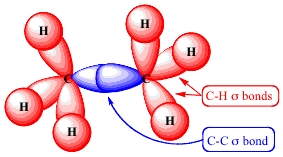 There's nothing preventing the carbons from rotating here.

On the other hand, double/triple bonds have pi bonds (in which two lobes each overlap) as well as sigma bonds: 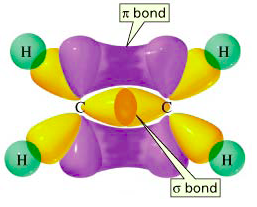 Here, it is impossible to rotate without breaking the pi bond. Note that this has some importance in how our eyes see -- one of the mechanisms in eyesight is a double bond in rhodopsin being broken (by incident light) into a single bond, rotating, and reforming (which leads to some nerve impulse).

Finally, to answer your question: The probability/average time depends on the compound and the surroundings. For double/triple bonds, it's more or less 0%.

Manish's Answer is appropriate for single and double bonds, however:

Rotation about C-C triple bonds is a nonsensical concept. There is no observable change in geometry. It is impossible to determine whether or not any rotation happens.

14
Electron density definition of single, double, triple bonds?
2
Bond length comparison between two carbon atoms
4
how to distinguish between carbon-carbon double bond lengths
1
Hybridization of carbon in CO2
2
Why is the force constant for double and triple bonds approximately double and triple of that of a single bonds?
2
How to assign priorities around the asymmetric carbon with its substituents having multiple bonds?