Hydrogen Bonding (with oxygen) - restricted to oxygen singly bonded to H or not?

I understand the following definition of a hydrogen bond from Merriam Webster:

an electrostatic attraction between a hydrogen atom in one polar molecule (as of water) and a small electronegative atom (as of oxygen, nitrogen, or fluorine) in usually another molecule of the same or a different polar substance

However, I wasn't sure if this applied to F, N, or O atoms that were not covalently bonded to H in the first place. A question regarding hydrogen-bonding came up on an exam for which the marks scheme read that both element X (with an O-H bond) and element Y (with an O in an ether group). However my teacher doesn't not agree with the marks scheme and, "[believes that the marks-scheme is] incorrect because Y doesn't contain O-H bonds so the O will not carry a large enough δ- to create hydrogen bonds with water."

Is she correct, or is the marks scheme? 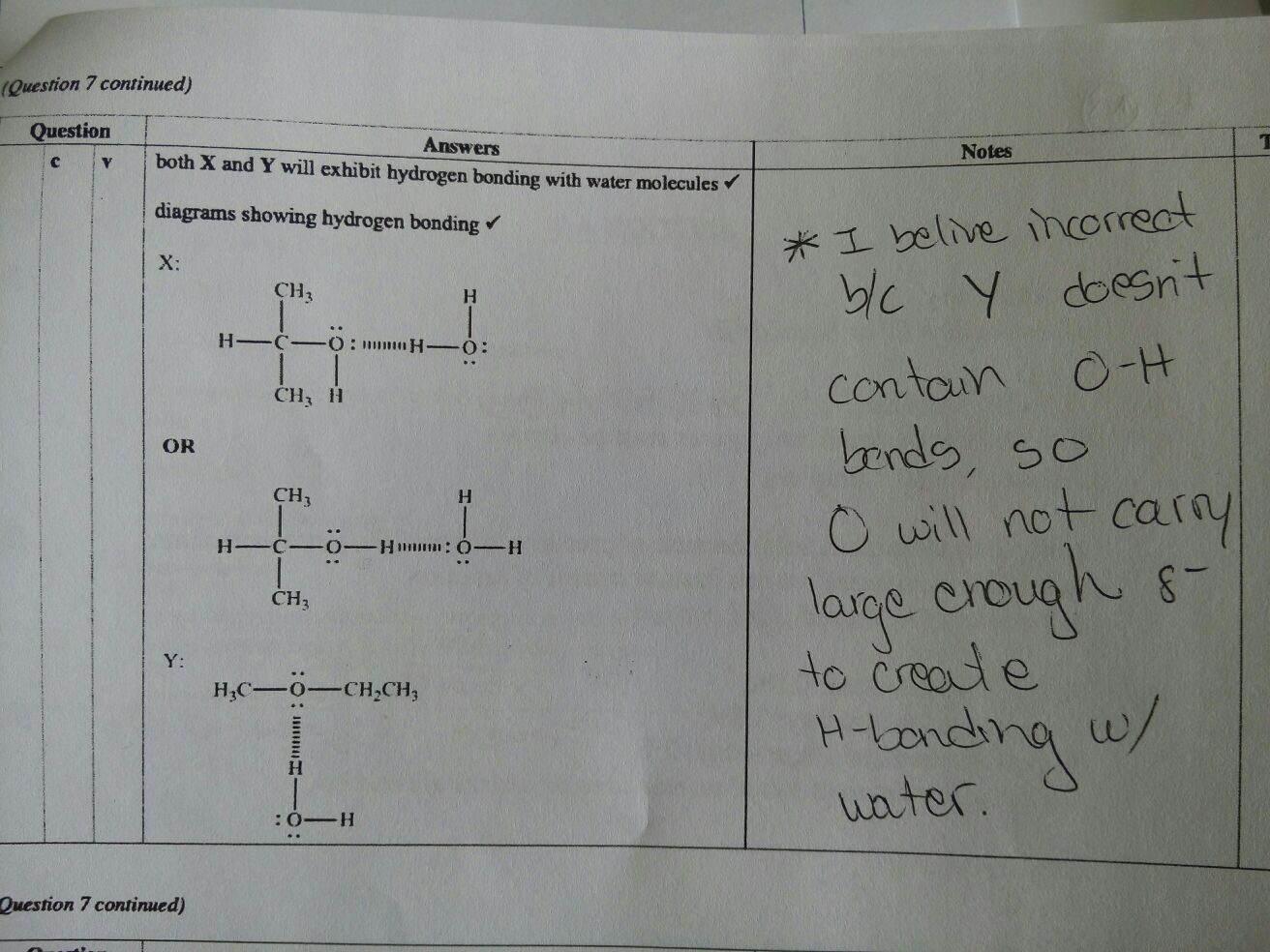 Note: I thought the same as my teacher up until I saw the MS.

Hydrogen-bonds require a $\delta^+$ hydrogen atom attached to an electronegative element, i.e. O, F, N, or Cl, and also an "active" lone pair on another electronegative atom. An electrostatic attraction between these two is an extremely strong kind of intermolecular dipole-dipole interaction.

However hydrogen bonding can occur between substances that cannot form the bonds with their own molecules. Because compound Y is an ether and can only accept hydrogen-bonds there are fewer bonds made overall between the mixture of substances, so the effect on the physical properties isn't so great. Nonetheless water can form hydrogen-bonds through its proton and functional groups such as ethers, esters, amines, amides, alcohols and carboxylic acids can all accept those bonds through the relevant lone pairs.

Another example would be a tertiary amine such as $\ce{N(CH3)3}$, which is miscible with water because of the hydrogen bonds it accepts from the water molecules even though it has no N-H bonds itself. Even $\ce{N(C2H5)3}$ is miscible with water at room temperature, and other tertiary amines continue to be soluble in water for the same reason: they are hydrogen-bond acceptors.

So the mark scheme is correct, and the teacher has shown a poor understanding of intermolecular interactions.

34
What exactly is hydrogen bonding (and does it really need fluorine, oxygen, or nitrogen)?
22
Is Hydrogen Bonding a Type of Dipole Dipole Interaction?
2
How polarization effects from cations affect H-bond strength
4
Why are alkanes 'non-polar'
2
Would hydrogen bond form in these scenarios?
2
Hydrogen donor without hydrogen acceptor?
0
Effect of isotopes on H-Bonding