Why does pyridinium dichromate (PDC) in dimethylformamide (DMF) oxidize alcohols to acids while in methylene chloride the oxidation stops at the aldehyde level?

As stated in the previously posted answer:

Though the text does state that water may form from decomposition of the dichromate anion, since DMF is so hygroscopic as a result of its high polarity ($\epsilon_\mathrm{r}=38^{[2]}$), I would not be surprised to learn that little to no over-oxidation occurs in completely dry DMF under an inert atmosphere.

This is only speculation though, and the dichromate anion may very well be decomposing to produce water in the solution. As such, I will propose a reaction mechanism for this decomposition. The first step can only occur when pyridinium dichromate is well solvated and protons are free to be transferred between the species, which occurs in DMF but not in DCM:

This produces chromic acid, another chromium(VI) oxidizing agent. Unlike dichromate oxidation, however, chromic acid oxidation actually produces water as a byproduct, which is then free to hydrate the resulting aldehydes:

I attempt to provide an reasonable answer to this question.

The Corey-Schmidt oxidation uses PDC (pyridinium dichromate) to primarily oxidise alcohols to carbonyl groups. PDC exists in the form of stable bright-orange crystals that remain unaltered by manipulation in the open air. Its lack of hydrophylicity facilitate its handling and allows the selective oxidation of alcohols in the presence of very sensitive functional groups.

Now, coming to your question the interesting thing is that DMF, which is very efficient in dissolving PDC,causes the over-oxidation of certain alcohols into acids, something that may happen even in the absence of added water.

So given that, it may be concluded that DMF causes PDC to over-oxidise due to following reasons (possible):

A reading of the Corey-Schmidt1 paper on the oxidation of non-conjugated primary alcohols and aldehydes to the corresponding carboxylic acids with dipyridinium dichromate (PDC) in dimethylformamide (DMF) makes no explicit mention of drying DMF but flame-dried glassware is employed. Perhaps this implies that the solvent was dried. @Ringo has speculated (Ringo's admission) how water may be generated from PDC in situ to then form the aldehyde hydrate necessary for oxidation. Given the stoichiometry of the reaction (3.5 equiv., PDC/RCH2OH), sufficient but limited water can be produced in this manner. Nonetheless, this pathway is viable. An equally speculative method of "hydration" invokes DMF as an alternative to water. continued 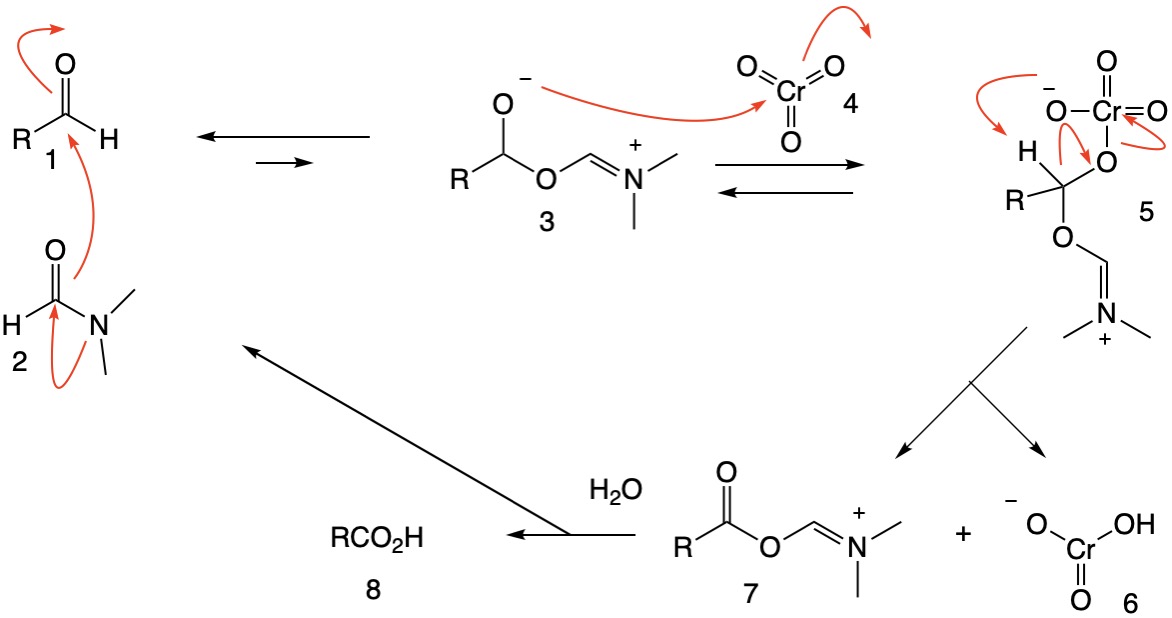 A species akin to hemiacetal 3 (it and other intermediates may be protonated) may add to chromium trioxide 4, or PDC itself, which forms 5 and collapses to a Cr[IV]-species 6 and 7, which is nothing more than a reactive, masked anhydride. The Corey-Schmidt paper experimental section calls for the addition of the reaction mixture to water.

2
Potassium permanganate oxidation of sugars
9
Why can't LiAlH4 react with alcohols?
10
Identification of types of alcohols
3
Why is sulfuric acid used in the Jones oxidation of alcohols?
2
Why is pyridinium chlorochromate selective compared to chromate, dichromate etc.?
5
Why doesn't a halide anion react with primary or secondary alcohols using SN2?
2
Are allylic three degree alcohols oxidized by the Jones' reagent via a classical carbocation intermediate?
1
Dependence of primary alcohol oxidation on presence of water and "strong" or "weak" oxidants
1
Complete Oxidation of Methanol