How to synthesise 2-aminoethyl benzene

Starting with benzene, describe the synthesis of 2-phenylethan-1-amine providing all the reagents and conditions.

I am not really great at organic chemistry and my knowledge is pretty limited.

I am not sure if that is correct as it seems a bit complicated for the synthesis of a seemingly simple compound. Also I am not sure on the exact conditions for the chlorination step.

I was also thinking of acylation with ehtanoyl chloride followed by Wolff-Kishner reduction to form ethyl benzene. However I am not sure on how to from the $\ce{NH2}$ group.

organic-chemistry synthesis
Share
Improve this question
edited May 16, 2021 at 14:07

Also, from ethylbenzene, it's very hard to introduce that amine group cleanly. You effectively just have a compound with C-H groups and you have to somehow introduce some kind of functional group into the non-benzylic position. Try to think backwards instead of forward!

The amine you want can be obtained by direct reduction of a nitrile either by simple $\ce{LiAlH4}$ reduction or hydrogenation:

That arrow essentially means "can be made from".

Of course, that's easy to make using a nucleophilic substitution reaction with $\ce{CN-}$ and benzyl chloride (for example):

To get from benzene to benzyl chloride, you could use a Blanc chloromethylation. So your forward synthesis would be: 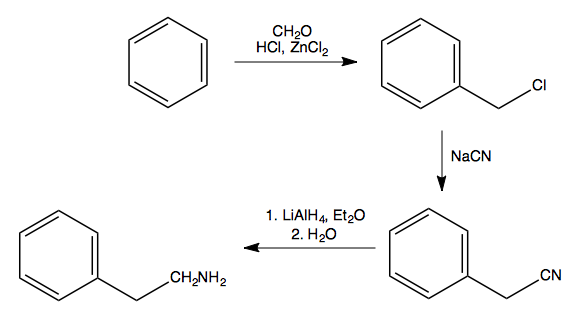 and you might want to use catalytic $\ce{KI}$ in the nucleophilic substitution step. Of course, for such a simple compound, there are tons of ways to synthesise it. The amine could be made from reduction of an azide, or by a reductive amination, and so on. I strongly doubt my proposed route is the most efficient. Still, I think it should work.

Theoretically, you could use a Friedel-Crafts alkylation and a radical bromination to get to benzyl bromide instead:

6
How to synthesize cyclopentane from cyclohexane?
11
Double alkylation of benzene to form tetralin
4
Synthesising Complex Aromatic Compound
4
Why is it aqueous and ethanolic conditions for nucleophillc substitution of cyanide ion with benzyl chloride?
7
Alkylation of benzene
3
How can I synthesize 2‐amino‐3‐(chlorosulfonyl)benzoic acid from toluene or benzene?
6
How is the hydrazone formed in the Wolff-Kishner reduction?