Can the first ionization energy for a specific element be calculated?

I'm taking a first-year Inorganic Chemistry course in college, and stumbled upon this problem:

For $\ce{Mn}$ and $\ce{P}$, calculate the first ionization energy and explain the difference between the obtained values.

Now, my course materials (written by our professor) apparently say that the first ionization energy can be computed using this formula. I say apparently because the "course materials" are poorly written PowerPoint slides with loads of unexplained terminology and abbreviations, so I may be misunderstanding.

where $Z_\mathrm{eff}$ is the atomic number minus the differentiating electron's shielding constant (calculated using Slater's rules) and $n_\mathrm{eff}$ is pulled out of a table of values (see here).

Unfortunately, it only seems to produce (somewhat) numerically correct results for $\ce{H}$ and $\ce{Li}$, and stops being useful for comparing them at $Z=5$. I wrote an implementation of the algorithm in Mathematica and compared the results it produces to the first ionization energies returned by ElementData (suitably converted from molar to regular), and it's a very rough approximation.

My question is, what am I missing? As far as I can tell from Wikipedia, there's no way to simply calculate ionization energies - they have to be measured. Is there some obvious detail I haven't spotted? Another way to interpret the problem text? Some elementary knowledge I don't have?

I tried to find out empirically whether your formula makes sense. The data I used was effective nuclear charges from this Wikipedia page (always the minimal value, Pt was discarded), and ionization energies already gathered for the answer to this question on this site. The principal quantum number was also manually added to the data set.

I explored the data in many ways and tried to find a simple expression which could give an estimate for where the ionization energy should lie.

First, I looked at what your formula would give: 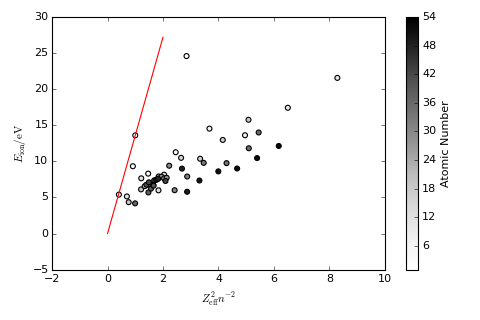 It is quite obvious that your formula describes two atoms perfectly and is absolutely terrible for the overwhelming majority of elements in the periodic table.

I present to you the best guess so far, based on simple manual adjustments and some exploration of the data:

Below is the graphical representation: 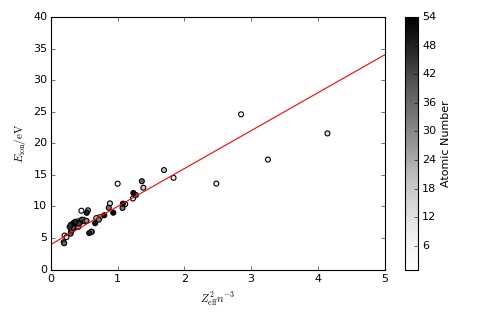 The error will still be large for many atoms, I estimate the median error to be about 2 eV. But if you want to use a simple formula to calculate the first ionization barrier, this would be the one I would use.

The data exploration was done in Python and is recorded in this iPython notebook. Feel free to have a look at it and even come up with a better model.

3
Is there a relation between the ionization energy and the electron affinity?