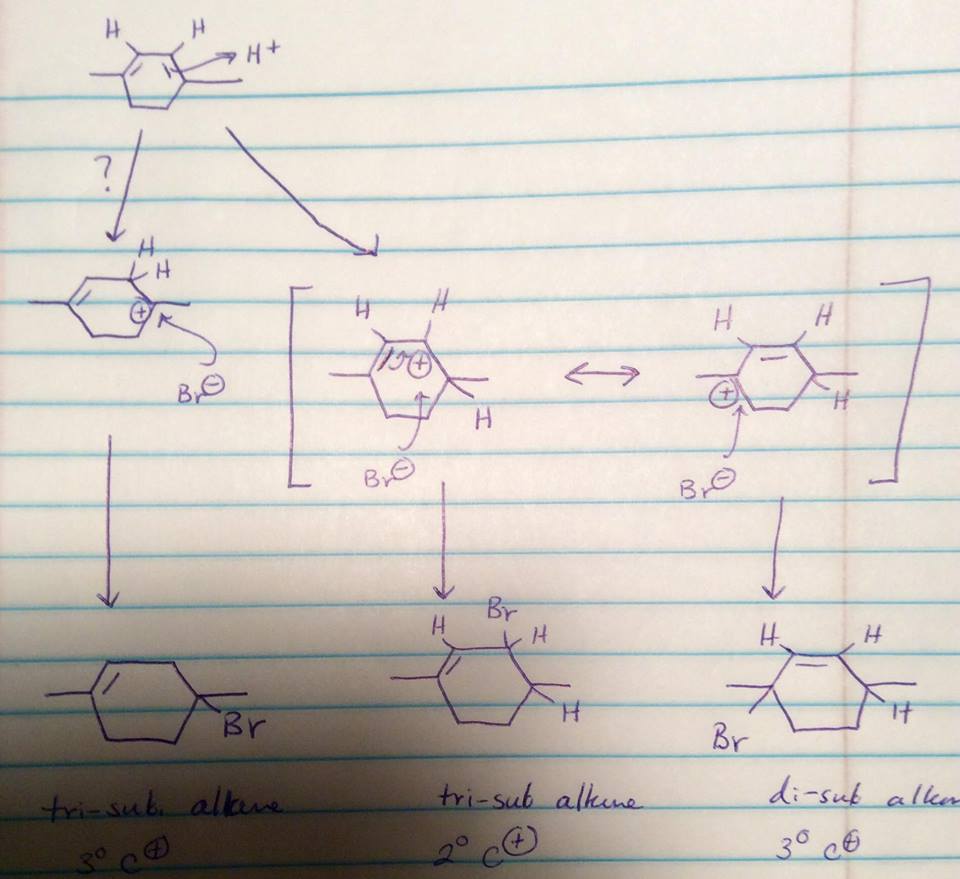 He says there are only two products - the two on the right that result from the resonance-stabilized complex. I can see a third product - the product on the far left with the question mark over an arrow.

So what's your take?

First off, let's discuss what we mean by "kinetic" and "thermodynamic" products. The kinetic product is the first formed product, the one that forms the fastest, the one with the largest rate constant. The rate constant, k, can be described using the Arrhenius equation $$\mathrm{k=Ae^{\frac{-Ea}{RT}}}$$ where A is the pre-exponential factor, a measure of the probability of a successful collision. Ea is the activation energy, the energy required to surmount the barrier to reaction, R is the gas constant and T is the temperature in Kelvin.

Usually, in a series of related compounds like we have here, the A factor (which is a very large number to begin with, so would need to change by a large amount to alter the course of a reaction) is assumed to remain relatively unchanged. Consequently the activation energy is viewed as the controlling factor in terms of which reaction pathway is favored.

The thermodynamic product is the product with the lowest energy of formation, the most stable product.

In a reaction where several products can be formed the thermodynamic product could be the same as the kinetic product, or it could be different.

Two examples to further clarify kinetic and thermodynamic products can be found in this earlier answer describing the Diels-Alder reaction between cyclopentadiene and maleic anhydride. The endo isomer is formed first - it is the kinetic product, but if the reaction is run under conditions permitting equilibration, then ultimately the more stable exo product will be predominate. Another example can be found in the sulfonation of naphthalene where naphthalene-1-sulfonic acid is formed initially (the kinetic product), but upon heating will equilibrate and rearrange to the more stable 2-isomer.

A key point here is that in order for the kinetic product to rearrange to the thermodynamic product, the reaction must be reversible under the reaction conditions.

Back to your question

could one also argue that the far left product is the kinetic product?

Technically, according to your diagram, the answer is "no". There are no equilibrium arrows in your reaction diagram, therefore if the far left product were the kinetic product it would be observed.

But maybe you inadvertently left out the equilibrium arrows, what would the answer be if you included them? All 3 possible products are rather analogous, so for starters we would expect similar A factors in the 3 pathways and look to differences in the activation energies to decide which is the preferred pathway (kinetic product). Your product on the left requires a tertiary carbocation as its intermediate, the other two products require a resonance-stabilized allylic carbocation which is further stabilized by a methyl substituent. The latter carbocation is lower in energy (resonance stabilization plus inductive and hyperconjugative stabilization by the methyl group) and so the kinetic product will derive from it.

Of the two allyl resonance structures you've drawn, the one on the right will carry a bit more importance in terms of describing the actual allyl carbocation due to the methyl stabilization described above. Hence I would expect the kinetic product to involve attack at the methylated allyl carbon leading to your far right product being the kinetic product.

Attack at the other allyl terminus produces a product with a methyl group on the double bond. We know from heats of formation that alkylation of a double bond stabilizes the system (because electrons are moving from higher [$\ce{sp^3}$] to lower [$\ce{sp^2}$] energy). Hence, your middle product is a possible thermodynamic product. Your molecule on the far-left also contains a tri-substituted double bond, it may also appear as a thermodynamic product.

The product on the far left cannot form in any reasonable amounts. Consider the HOMO of s-cis-butadiene (which is a close enough model system to your dimethylcyclohexadiene): Those contributions that extend into space furthest are those on the terminal carbons. 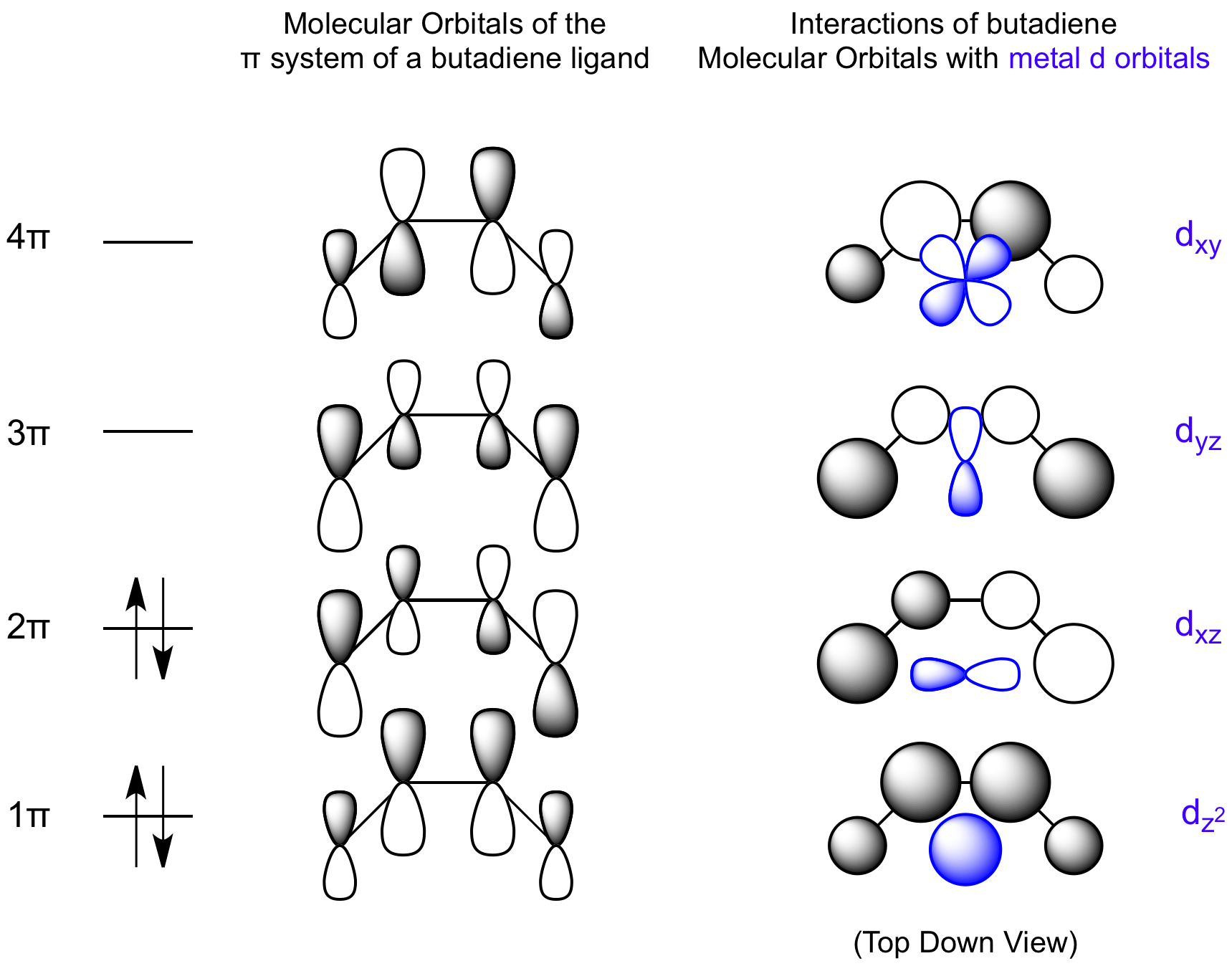 (Image credit: ChemTube3D.com by Nick Greeves. Ignore the right half of the image, it is not relevant to this part of the question.)

Therefore, it is most likely for an electrophile to attack one of these two carbons. Then also, the attack on the terminal end will give an allylic cation while attacking the middle carbon will result in an unstabilised (albeit tertiary) cation — an allylic cation is much more stabilised and therefore the other cation is unlikely to form at all, even if we don’t consider the lesser contributions of the central carbons to the HOMO.

Determining a kinetic product is not easy at all. There are numerous factors to consider:

The thing about our orbitals here is that we only have one allylic cation where both ends of the allylic system share approximately $+\frac{1}{2}$ charge and being very similar. Thus, we don’t truly know whether it is the slightly larger contribution of the tertiary carbon to the allylic system’s LUMO that is more important or whether it is the more accessable (for a large atom such as bromide) secondary carbon with less steric hindrance. I for my part would not allow myself to judge these two effects and would rely on experimental evidence for one or the other. However, I am inclined to believe that the kinetic product is that with less steric stress (that the steric argument outweighs the LUMO argument) and that thus kinetic and thermodynamic products are identical.

26
Addition of hydrogen bromide to 1,3-butadiene: thermodynamic and kinetic control
24
Thermodynamic vs Kinetic Sulphonation of Naphthalene
17
Why is the exo product formed in the Diels–Alder reaction between furan and maleic anhydride?

15
Resonance in carbocation derived from allenes
8
Comparison of rate of dehydration of primary, secondary & tertiary alcohols on cyclohexane
8
Why is the thione tautomeric form of 2-Mercaptopyridine favoured?
2
Molecular Orbital Hybridization vs Delocalization for positive charge stabilization
0
Can a reaction have carbocation resonance followed by a hydride shift?
2
Acids used in Friedel-Crafts alkylation
1
Acid catalysed dehydration of alcohol with a bicyclo group
2
Chain transfer in polystyrene synthesis