Why are acids usually depicted in fiction as green?

In cartoons, etc., acid is generally shown as vividly green, as in this scene from the Simpsons: 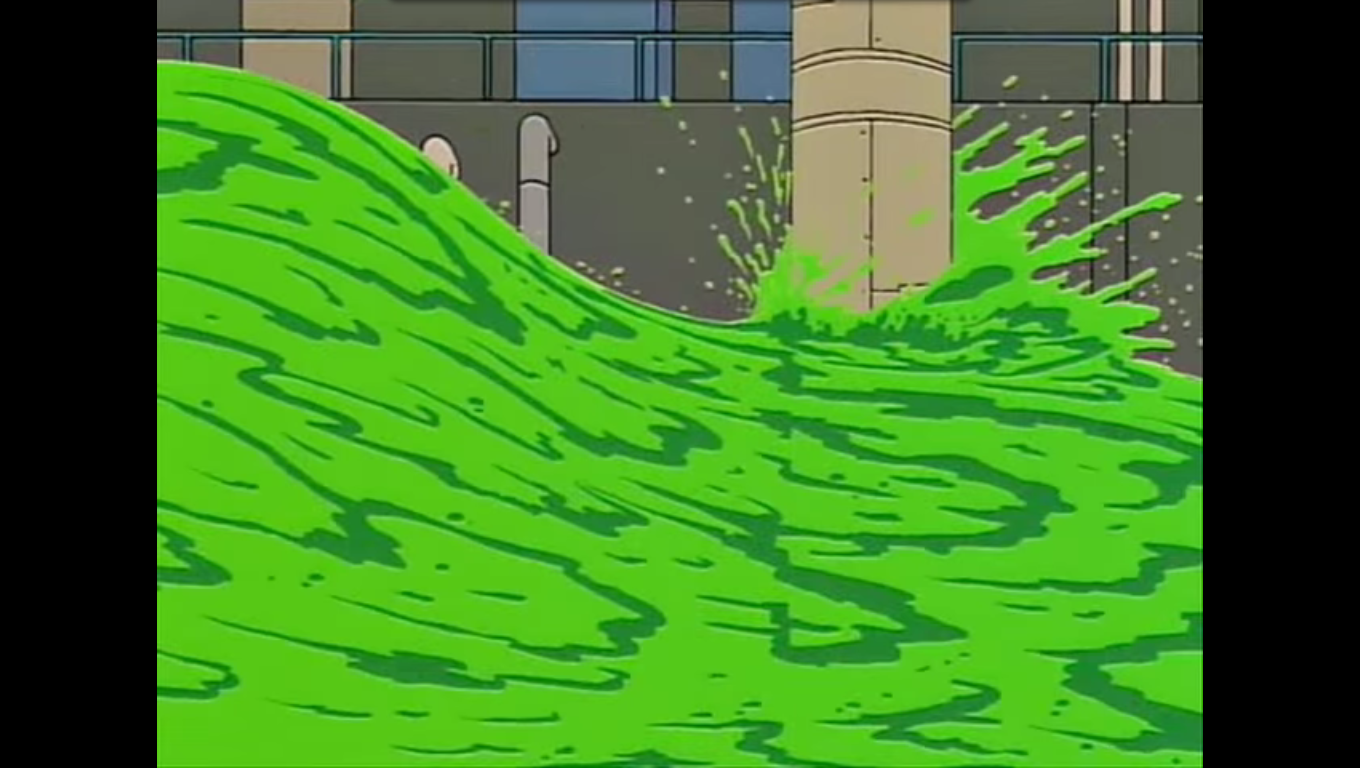 We even have the colour "acid green".

But when I used to use acids in chemistry class, they weren't bright poisonous green. They were mostly colourless, as, for example, this picture of sulfuric acid from Wikipedia: 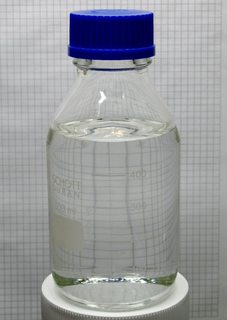 So where does this idea of green acid come from? Are there acids which are actually green? Or perhaps acids are green when highly concentrated?

The green is the color of bile which usually accompanies gastric acid. Acid in its original context referred to a bitter taste. Bitter tasting compounds, such as vinegar, is what led to the modern chemical definition. The chemical definition is less likely to have influenced the populace than the experience associated the somewhat bitter, acidic, taste of gastric acid accompanied by bile.

Actually, I'd rather say the green-yellowish color is attributed to both toxic chemicals and radioactive waste in general and not only to the super acids. It might as well be that the corrosive acidic stuff seen in cartoons, movies and video games is green due to the cliché introduced by the comic book authors, namely during the Golden Age inbetween late 1930s and early 1950s. The first issue of Batman from 1940 introducing Joker already contains a pool of green waste (BTW it's acidic as we shall see later): 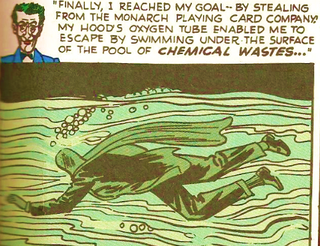 I cannot speak for the exact motives of the comic books' artists, but at that time period there already were several chemicals that could affect the choice of the "acid-green" color for the years to come; I tried to sort them from the most fictional to the most plausible and fitting the "green acid" term:

Finally, it's also worth noticing that the green-yellowish color of approx. 550 nm $\color{#80FF00}{\Large\bullet}$ is the most noticeable color to the human eye under usual ambient daylight conditions, helping to quickly adjust viewer's focus to what's more important or to just overwhelm.

One chemistry related answer could be that chlorine gas has a greenish hue after which it was named(wikipedia):

Solutions of chlorine in water contain chlorine (Cl2), hydrochloric acid (which is arguably the most commonly known acid), and hypochlorous acid:

Finally, in WWI, chlorine gas was used as a chemical weapon, that caused acid burns to skin, eyes and lung:

By April, German chemists had tested a method of releasing chlorine gas from pressurised cylinders and thousands of French Algerian troops were smothered in a ghostly green cloud of chlorine at the second Battle of Ypres. With no protection, many died from the agonies of suffocation

1
Which one is nitric Acid, HNO3 by itself, or when it is included in H2O?
6
What's the technical term for supercharging an acid with an oxidizer? And does it always work?
9
How can I make an acidic pen to burn paper on writing on it?
28
Acid Accident Treatment
8
Weird Wikipedia Section on Oxidizing Behavior of Nitric and Sulfuric Acids
11
Color of methoxy substituted phenyl rings when heated in the presence of acid
1
Why doesn't KI(aq) react with HCl(aq)?
2
Strength of bases and acids
1
Can ferrous ions exist in an acidic solution?