When dispensing liquid nitrogen, why does the surface get wet rather than frozen?

When I go to dispense liquid nitrogen after someone else has just used it (say in the last 30 minutes or so), the copper pipe used to transfer the liquid is covered in frost/ice.

This makes sense, as the pipe gets incredibly cold, condenses water out of the air which freezes extremely quickly due to the vast difference in temperature (77K for liquid nitrogen vs. water freezing at around 273K).

What I find confusing is that once I start dispensing the nitrogen, this frost/ice appears to 'melt' into a liquid, this seems less intuitive to me. My first thought is that so much new water is condensing out of the air that the frost/ice gets 'wet', however I'd expect this to freeze very quickly and the ice to eventually get so thick that this issue of wetting became irrelevant. Alternatively, one could imagine condensing something else out of the air which is indeed a liquid at these temperatures such as oxygen, but in this case I don't observe the characteristic blue colour.

An example of the type of dewar in question 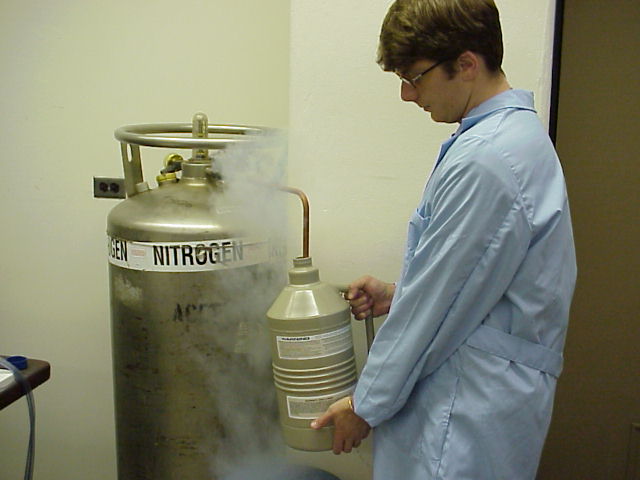 Your "first thought" is basically right, with one clarification. The addition of "so much new water" to the existing ice results in the formation of liquid water due to the latent heat released upon condensation. This results in melting of the existing frost and thus the transitory existence of liquid water.

Also you can rule out oxygen condensation. Firstly there is some insulation between the 77 K liquid nitrogen and the atmosphere, so the surface is not likely to cool all the way to the 90 K boiling point of oxygen. More importantly, oxygen would not condense from the air at 77 K anyway. You have to think in terms of saturation vapor pressures, and the vapor pressure of oxygen in our air is only about 0.21 atmospheres.

12
Why does oxygen not condense onto open dewers of liquid nitrogen?
23
Why does water dissociate to H3O+ and OH- rather than H+ and OH-?
0
Is it possible to make liquid nitrogen with a bottle of CO2 gas and a freezer?
2
Solar still and how it works
5
Why does the Born equation give the Gibbs free energy of solvation rather than enthalpy of solvation?
14
Why does liquid water form when we exhale on a mirror?
0
Why does a NOx container get cold when NOx is released? and What is the relationship of the vapor pressure curve with the liquid-vapor dome?
4
Why is the carbon monoxide triple bond stronger than the nitrogen-nitrogen triple bond?