What will happen in the following reactions? This is Problem 3d from Chapter 6 of Zweifel and Nantz's Modern Organic Synthesis. 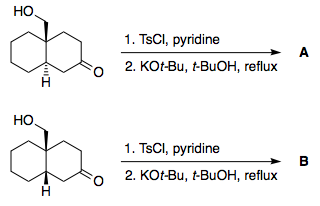 I thought that after the hydroxyl group is converted into a good leaving group ($\ce{OTs}$), an enolate would be formed which would attack $\ce{CH_2OTs}$, but I guess the fused cyclobutane thus obtained would be too strained. What else could happen?

I went looking for this question again today after talking to someone about a similar reaction, then realised I never got round to trying to actually answer it.

In the first case, with the trans-fused ring system, we first get tosylation as expected. Using the bulky potassium tert-butoxide, we get enolate formation at the least hindered alpha position. This enolate is then setup, as can be seen in the conformational diagram below, to displace the tosylate forming the new ring. This is confirmed in the cited literature.

In the second case, with the cis-fused ring system, things are a little more complicated. Once again we get tosylation, however the the cis-fused product can be drawn in multiple 3D conformations, only one of which is productive (shown in orange below).

In this case, the steric argument for enolate formation doesn't hold, as the thermodynamic enolate is unproductive, and as such only the enolate formed at the most hindered position goes forward to form the product.

As you mentioned in your initial post, "the obtained structure would be too strained", which is what prevented me from thinking this pathway happened in the first place. However, looking at the original Tetrahedron paper, they do have evidence to back up the formation of these ring systems. One possible conclusion is that due to the conformational preferences of the 6,6-ring systems, the bonds are closer together than you'd maybe expect, meaning there isn't such a penalty to formation of the cyclobutane.

Not the answer you're looking for? Browse other questions tagged organic-chemistry stereochemistry carbonyl-compounds conformers or ask your own question.

8
Does an acetal give a positive Tollens test?
5
How to synthesise N,N,3‐trimethylbutanamide from 1‐chloro‐2‐methylpropane?
0
Conformation identifying cis and trans
5
NGP mechanism vs the simple carbocation mechanism
4
Finding major product when bromonium compound is acted upon by a nucleophile
3
Point group of cis- and trans-decalin