What makes these particles hygroscopic? [duplicate]

Hygroscopy is the ability of a substance to attract and hold water molecules from the surrounding environment.

For cotton there is capillary action. Hydrates like KOH attract water due to lower energy. What are other possible reasons? Particles like - diesel fuel, glycerol, salt, sugar and H2SO4 are also hygroscopic? I have tried to find the reason, but I cant?

As to your question a to whether a hydrophobic compound can also be hygroscopic, the simple answer is "yes to a point." Organic compounds can elicit both behaviors simultaneously when they have varying functional groups with a wide enough separation. BioDiesel is an ester with a very short side and a long side, the short side can exhibit polar qualities due to the presence of oxygen while the long chain exhibits nonpolar qualities. The polar side is what attracts the water, while the long chain repels the water. Cells of living organisms utilize a similar method to control the amount of materials crossing the membrane. I hope this explanation helps. Das Nerd 20:08, 28 October 2006 (UTC)

The composition of petrol diesel is very different, that's why it is not as hygroscopic as biodiesel.

As far as I know hygroscopy depends mostly on polarity. The water molecule is a polar, so it likes to mix with other polar compounds, like KOH, glycerol, salt, sugar, H2SO4, etc. Apolar compounds repel water. Air consists mostly of apolar components, so when the water in the air meets with polar things like sugar, it starts to move to that phase, because it has lower energy in there.

E.g. silicagel which is a common desiccant has this structure: 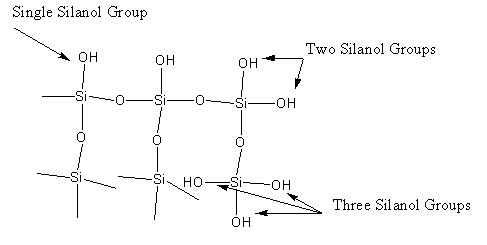 where you have polar $-OH$ chemical groups on the surface, that's why it is very hygroscopic.

While silicone oil contains molecules with this structure:

where you have apolar $-CH_3$ chemical groups on the surface, which makes it not hygroscopic.

Not the answer you're looking for? Browse other questions tagged reaction-mechanism water or ask your own question.

15
What is the cause of hygroscopy?

3
Ethanol and water hygroscopic equilibrium concentration
4
What makes E1 more favourable than SN1?
18
What makes oceanic desalination so expensive?
15
What is the cause of hygroscopy?
10
What makes water a liquid (when it is)?
3
Does storing a hygroscopic reagent in a bottle makes it prone to absorb humidity from the air trapped inside?
31
What makes ice slippery?
1
Hygroscopic material absorption level
0
Hygroscopic Substances and Drying Agents
4
What component(s) of instant coffee make it deliquescent?