When looking for exocyclic double bonds in a diene, should a double bond not connected to the conjugated system be considered?

For example, in this compound, should the marked double bond considered as an exocyclic double bond? 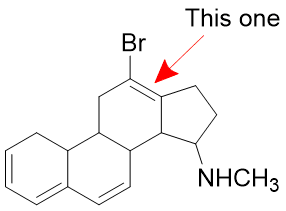 Should the marked double bond considered as an exocyclic double bond?

The bond you've pointed at isn't in conjugation with the 'triene'

The Woodward rules are specifically related to the effect of groups in conjugation, a simple test of which is to see if you can push curly arrows between the pi bonds. If you try this for your molecule you'll quickly see that the bond you've highlighted is too distant from the conjugated system to have any involvement.

If you find a double bond outside a ring (as in the 4 ring system here), it will be considered as exocyclic. So, the pointed double bond is exocyclic to the adjoining cyclopentane ring.

Not the answer you're looking for? Browse other questions tagged organic-chemistry uv-vis-spectroscopy or ask your own question.

1
Why do certain groups withdraw/ donate electron to double bond or conjugated system in resonance effect?
5
How many stereoisomers are possible for hepta-1,6-diene?
6
Preferred IUPAC names for branched unsaturated hydrocarbons (polyenes)?
5
Why is (1E,3Z,5E,7E,9Z,11E)-cyclotetradeca-1,3,5,7,9,11-hexaen-13-yne not antiaromatic?
4
How can I define alkenes using graph theory?
12
What is an exocyclic double bond?
2
Reduction of conjugated double bond by sodium borohydride
0
IUPAC nomenclature of cycloalkadienes with substituents and alkenes on the same carbons