I would like to determine the vapore pressures of a couple of substances (rocket propellants) over a significant temperature range within a ~10% error margin.

For a first test, I tried to approximate the vapor pressure curve of Dinitrogen Tetroxide (N2O4) via the Clausius-Clapeyron (CC) relation, the Lee-Kesler (LK) method and the Ambrose-Walton (AW) method and compare the results to each other and to literature values that are available for N2O4. Unfortunately my results deviate alot (up to 60%) from the published values.

Attached you find a plot of my attempts and a small table that compares the different methods and their deviation from the literature values. Don't let the first picture mislead you! As the table and the detailview show, even at low pressures/temperatures the deviation is quite significant!

Is this large error margin really within usual boundaries? What are your experiences with vapor pressure approximation? Could you provide some tips on how to improve my results?

Some Details on my approach

I chose the boiling temperature at atmospheric pressure as input, but I have no idea which value to choose for the enthalpy of vaporisation. Many source state the assumption of a constant enthalpy, but that puzzles me, since for N2O4 it varies by some 16kJ/mol over the temperature range I'm interested in.

Which value is usually taken - the enthalpy corresponding to the values provided as input or the one for the target temperature?

As expected both methods produce very similar results and are convenient to use, since they only rely on the critical pressure, critical temperature and the acentric factor. But MY results are really disappointing, especially since Wikipedia promises a maximal deviation of 10%.

As a side note:

For different reasons, I don't want to use interpolation of substance specific vapor pressure tables, but instead I would like to use one of the many vapor pressure equations. It is important that the approximation results in a closed representation of the vapor pressure curve , therefore I would like to avoid methods that have points of discontinuity (e.g. Antoine equation?). Since I don't have access to public databases that cover the substances I'm interested in, approximations that rely on "exotic" empirical parameters (Wagner, DIPPR, etc.) are also out of the question. 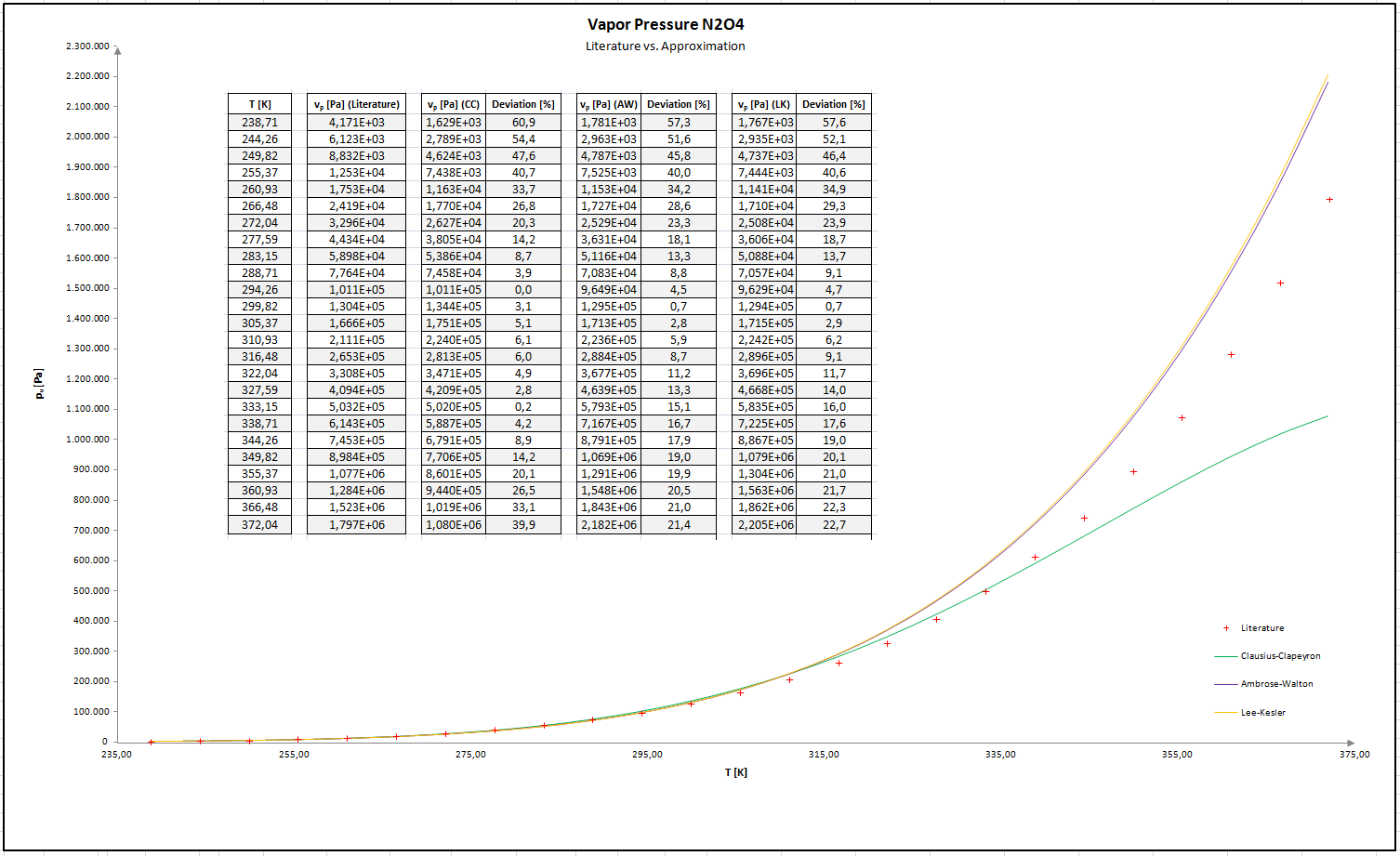 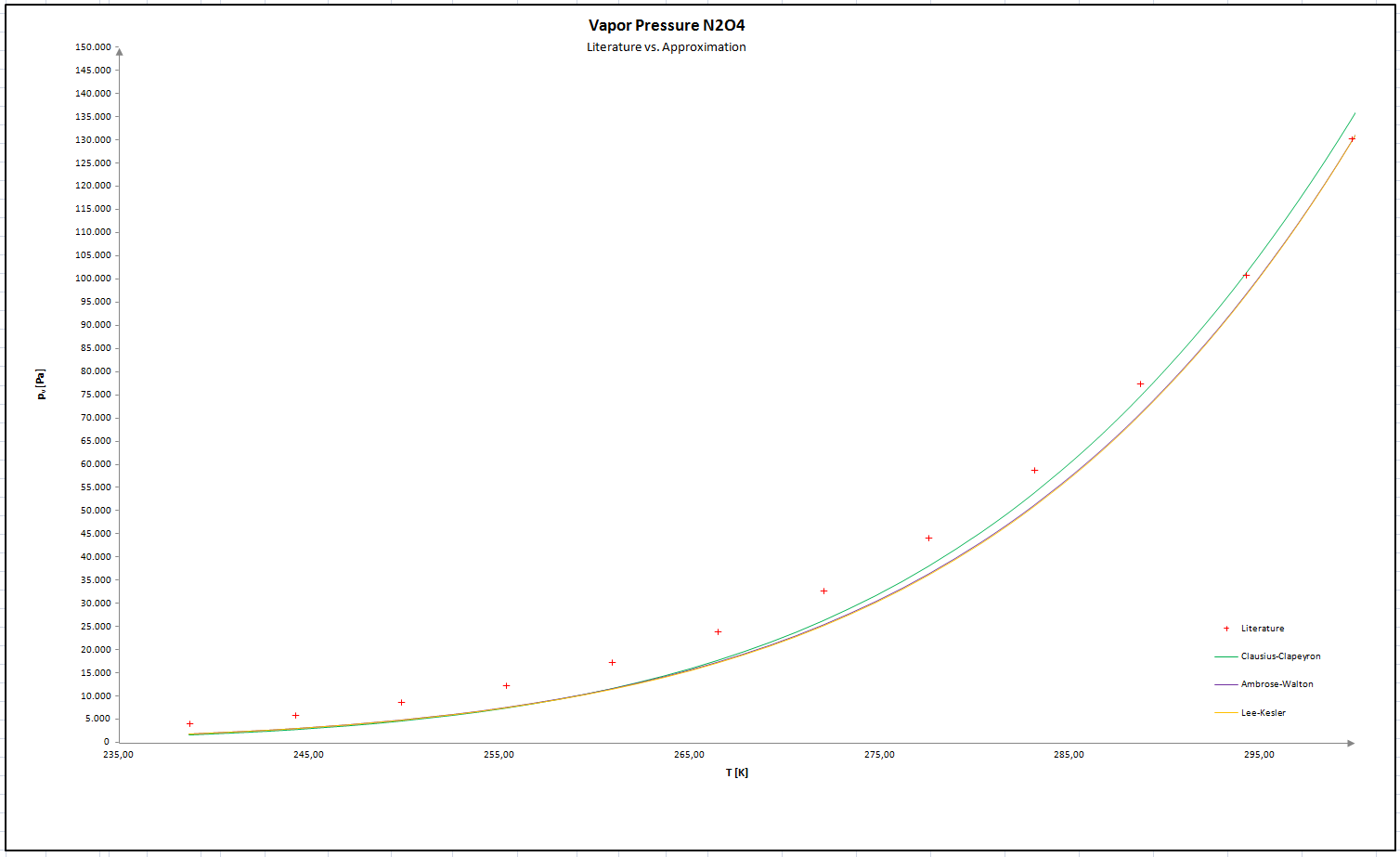 I would like to determine the vapor pressures of a couple of substances (rocket propellants) over a significant temperature range within a ~10% error margin.

The best way to determine vapor pressures is to measure them. Is that not an option for you?

It is important that the approximation results in a closed representation of the vapor pressure curve , therefore I would like to avoid methods that have points of discontinuity (e.g. Antoine equation?).

The Antoine equation isn't discontinuous by nature, it's only discontinuous if you use two different parameter sets for a single substance in order to widen the temperature range of applicability of the equation.

What are your experiences with vapor pressure approximation? Could you provide some tips on how to improve my results?

However, many of the other methods you report using, such as the Lee-Kesler and Ambrose-Walton methods, also require compound specific parameters: specifically, the critical temperature and pressure of the compound of interest. Even the Clausius-Clapeyron equation requires an (assumed constant) enthalpy of vaporization, which is also a compound-specific parameter.

Antoine equation parameters for your compounds of interest

Not the answer you're looking for? Browse other questions tagged physical-chemistry vapor-pressure fuel or ask your own question.

6
Relationship between auto-ignition temperature with pressure and fuel
2
How can I calculate the boiling temperature of a pure substance as a function of pressure?
15
PV=nRT approximation on other planets?
0
Effect of an inert gas on steam vapor pressure at equilibrium
3
Impact of Pressure on equilibrium of Tin allotropes
1
Calculate Gibbs energy of dinitrogen pentoxide using its vapor pressure and sublimation
1
Clausius–Clapeyron equation: shape of phase diagrams makes no sense
1
Does the vapor pressure of a substance depend on the presence of other gases?