How can the formation of an alkene be explained during the hydrolysis of an ester when the alkoxy moiety is tertiary?

That's right, and it means that there must be a different mechanism predominating.

This is the "standard" mechanism for ester hydrolysis in acid: 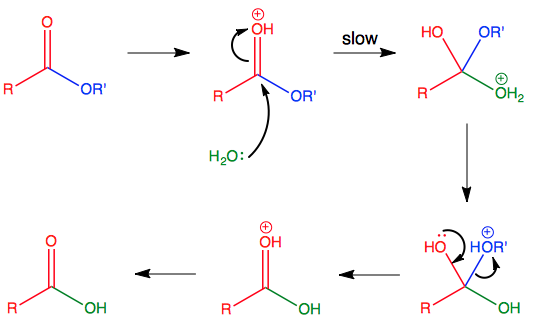 If you look closely at the colour-coding, you will notice that it is the blue bond in the ester which connects the $\ce{C=O}$ to the $\ce{OR'}$ that is broken. This is called the acyl bond. The rate-determining step involves two molecules - it is a bimolecular reaction. Therefore, this ester hydrolysis mechanism is called $\mathrm{A_{AC}2}$: $\mathrm{A}$ for acid, $_\mathrm{AC}$ for acyl bond, and $2$ for bimolecular.

Let's use $\ce{R'} = \ce{C(CH3)3}$, the prototypical example of a tertiary alkyl group. The alternative mechanism goes as follows:

Notice here it is the green bond, between the $\ce{O}$ and the $\ce{R'}$, that is broken. This is called the alkyl bond. The slow step is unimolecular. So, following the same logic as before, this hydrolysis is called an $\mathrm{A_{AL}1}$ mechanism. (It doesn't matter which of the red and blue bonds ends up as the carbonyl group and which one ends up as the $\ce{OH}$ group - they are interchangeable via a simple proton transfer.)

As you correctly suspected, the formation of the $\ce{C(CH3)3}$ carbocation occurs. Depending on the reaction conditions, it could be attacked by a nucleophile (e.g. if you use ethanol as the solvent, you might get some ether byproduct), or it could just simply lose a proton to give isobutene.

What factors may work to favour the $\mathrm{A_{AL}1}$ pathway? Well, the most obvious thing is the formation of the relatively stable tertiary carbocation. Another possibility is steric hindrance arising from the bulky $\ce{R'}$ group, which disfavours nucleophilic attack of water in the "normal" pathway. In fact, t-butyl esters like the one shown above are so resistant to nucleophilic attack (under basic conditions) that they are sometimes used as protecting groups for carboxylic acids!

Not the answer you're looking for? Browse other questions tagged reaction-mechanism hydrolysis esters or ask your own question.

6
Side Products of Dow's process
5
Does the Dieckmann Reaction proceed via the conjugated enolate of the product?
11
What is the major product in the reaction of 2,3-dichlorobutane with sodium amide in liquid ammonia?
9
Reaction of phenol and zinc dust
2
Prins reaction mechanism
0
Formation of (Gamma) Methylparaconic acid
2
Alkene reaction with acid via SN1 reaction