Are there any examples of nuclear spin isomers having consequences for chemical reactivity?

Ortho- and parahydrogen are two forms of the $\ce{H2}$ molecule that are distinguished by their pairing or antipairing of nuclear spins, giving rise to metastable singlet (ortho-) and triplet (para-) states. This constitutes an example of nuclear spin isomerism.

Whilst the thermal properties of these two species are different, my understanding is that their chemical properties are essentially identical. Are there any examples of this kind of isomerism having nontrivial implications for chemical reactivity?

physical-chemistry hydrogen spin
Share
Improve this question
asked May 17 '12 at 15:28

Papers in the field of preparation or selection of nuclear spin isomers have introductions that justify the work by potential applications and some of them include chemical reactions, either under that name or under the more descriptive terminology of “reactive collisions”. While no specific cases are cited as examples, the potential exist but only in limited situations such as bimolecular reaction in molecular beams.

From what I have seen, the canonical reference is “Detailed symmetry selection rules for reactive collisions”, Mol. Phys. 1977, 34, 477–504. This is the theoretical paper laying out the foundations of the effect of nuclear spin isomerism on reactions. I don't have access to the full text, but here is the abstract: 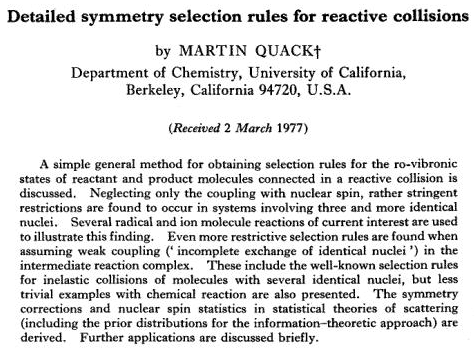 It confirms what I suggested in my earlier comment: the different nuclear spin isomers have different rovibrational states, and accounting for effect changes the selection rules indicating which collisions are reactive or not.

Large dependences of the intensity ratios on the parent gases have been observed, indicating the spin memory of protons even after chemical reactions. The results clearly demonstrate the existence of selection rules on nuclear spin modifications in chemical reactions theoretically anticipated by M. Quack.

Their results are obtained on the formation of H3+ ions from a H2 plasma.

Not the answer you're looking for? Browse other questions tagged physical-chemistry hydrogen spin or ask your own question.