I have just started learning conformational analysis, and a major doubt came into my mind.

In simple alkanes such as ethane, the staggered conformer is much more stable than the eclipsed conformer. This fact may be explained as follows:

I have no issues with this part. Then, I started reading about alkenes. In the simple example of propene, two cases may arise, as shown in the figure. 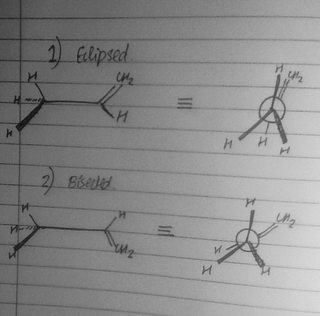 Note that (2) can be obtained from (1) by rotating the C-C bond by 60 degrees. Unlike in the case of alkanes, the eclipsed form is more stable, not the bisected form. This can be easily accounted for: In the eclipsed form, the Hydrogen is oriented in the right way to allow for effective Hyperconjugation. This involves delocalization of electrons from C-H sigma bond to the C=C pi antibonding orbital.

My main question is about when it becomes more complicated. Let me take the example of 1-butene. Here, we have twice the number of eclipsed and bisected conformers. I have labelled them as E1, E2, B1 and B2 (E= eclipsed;B=bisected) 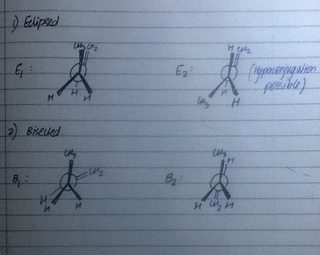 In alkanes staggered conformers (all anti) are local minima, while eclipsed conformers represent transition states. The first is "stable", while the latter is not. The rotational barrier has been measured and calculated often, it is around 12 kJ/mol.[1]

In alkenes the eclipsed conformers are local minima, while the staggered, or more accurately bisected, conformers are transition states. The rotational barrier for propene is only about 8 kJ/mol.[2]

I have performed a full, relaxed rotational scan of 1-butene around the central carbon-carbon bond axis (blue). The minima and maxima of this scan have been reoptimised and thermal corrections at 298.15 K and 1 atm have been added (orange). 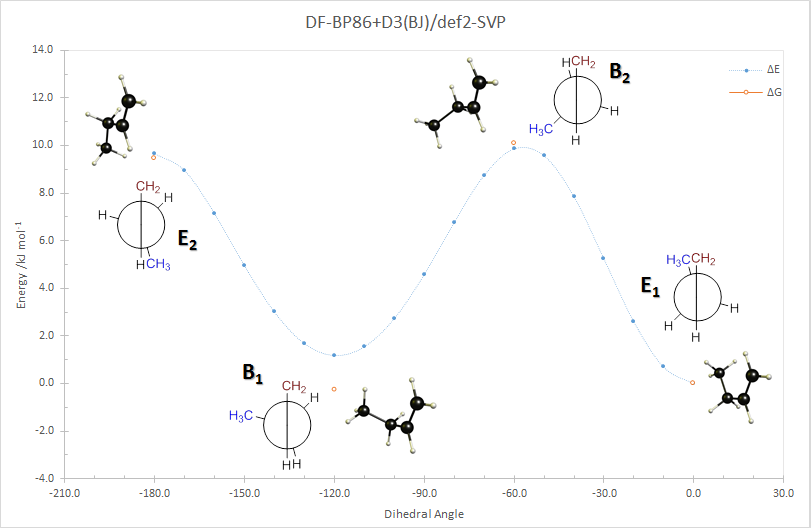 In the B2 conformer the overlap between those orbitals is not ideal. The nodal planes in the anti-bonding orbitals are in the way.

The representations for E2 are analogue to E1, and B1 is similar to B2. Because of time reasons I have not been able to create the pictures yet.

Taking the maximum difference in the energy we can approximate the rate of the reaction with transition state theory (assuming $\kappa=1$): $$k = \kappa\frac{k_\mathrm{B}T}{h}e^{\frac{- \Delta G^{\ddagger }}{RT}} \approx 1\times10^{11}~\mathrm{\frac{1}{s}}$$ This is ultrafast and at room temperature we consider it a free rotation. With spectroscopic methods we will not see a difference. We would probably have to cool the system down to below 1 K to actually see two (E1, E2) conformations.

Steric effects are often electronic effects in disguise, they offer tempting explanations, but are often rooted in a more complex electronic explanation. In this example the possibility of hyperconjugation explains the slightly higher energy the bisected forms compared to the staggered forms.
Hyperconjugation can come in different forms, the most common explanation is the overlap of an empty anti-bonding orbital with a filled (non-)bonding orbital. In this scenario it does not matter which elements are involved in these interactions.
There is even negative hyperconjugation, but this is a little beyond the scope of this post - if there are more questions about the topic, you are always welcome to ask them here.

Both E1 and E2 are made more stable by hyperconjugation.

Hyperconjugation can involve electrons in a sigma bond (either C-H or C-C, no restriction) with an adjacent empty (or partially filled) non-bonding p-orbital, antibonding sigma or pi orbital, or filled pi orbital, to give an extended molecular orbital that increases the stability of the system.

Between the two, E1 and E2, as you can probably guess E2 is better because of steric effects.

Not the answer you're looking for? Browse other questions tagged organic-chemistry stability conformers hyperconjugation or ask your own question.

7
Which tautomer of hexane-2,4-dione is more stable?
9
Why do sp2 carbons tend to prefer eclipsed conformations whereas sp3 carbons prefer staggered