If this compound exists, what will be its name? 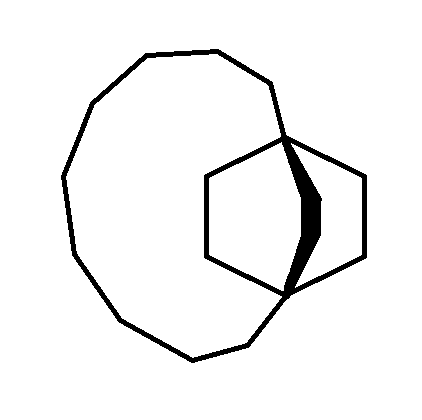 For your proposed name ‘bicyclo[9.2.2.2]heptadecane’, you obviously followed the nomenclature of similar bicyclic systems, such as bicyclo[9.2.2]pentadecane.

However, the structure given in the question is not a bicyclic ring system because it includes one additional secondary bridge; therefore, the structure actually is a tricyclic system.

The additional steps for the naming of tricyclic hydrocarbons are described in the current version of Nomenclature of Organic Chemistry – IUPAC Recommendations and Preferred Names 2013 (Blue Book) as follows.

The name of the tricyclic system is then constructed by citing:

(a) the prefix ‘tricyclo’, in place of ‘bicyclo’, indicating the presence of three rings in the polyalicyclic system;

(b) numbers indicating the bridge lengths, starting with the two branches of the main ring (…), followed by the main bridge (…), and the secondary bridge (with superscript locants separated by commas indicating its points of attachment to the main ring), all separated by full stops and placed in brackets,

(c) the name of the acyclic hydrocarbon having the same total number of skeletal atoms.

Therefore, the correct name for the structure given in the question is tricyclo[9.2.2.21,11]heptadecane.

0
Naming substituted branched alkanes with different projections
4
Naming of ester alkoxide
1
Naming CHCl(NH2)OH
4
What would this unsaturated cyclic compound be called?
3
What is the chemical name of the compound H2S4O?
2
Are these alternate names for long chain hydrocarbons with complex substituents accepted?
0
Naming of a dispiroalkane compound
1
Naming a coordination compound
2
How do you name a bicyclo compound with a fused benzene ring?