Why is the molecular peak not observed in the mass spectrum of 2,2-dimethylbutane?

Why isn't the molecular weight of 2,2-dimethylbutane on the mass spectrum? I can tell that a $\ce{-CH3}$ group is removed just by the math, but I do not know the reason why. The molecular weight is 86 and I know it has to do with fragmentation. 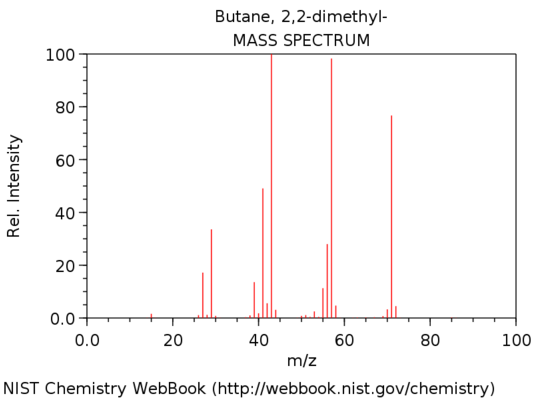 The answer probably has to do with how the mass spectrum was obtained.

Most mass spectra that are provided online, including the ones on the NIST WebBook, are electron ionisation mass spectra. That means that you put the sample in a chamber, accelerate electrons to a really high speed (giving them approximately $70~\mathrm{eV}$ of energy), and then bombard the sample with those high-energy electrons in order to ionise the sample.

The ionisation of these organic molecules doesn't take that much energy - $15~\mathrm{eV}$ is a good approximation. So you have an extra $55~\mathrm{eV}$ of energy in each molecule. How can the molecule get rid of this excess energy? The simplest way is to break chemical bonds; a typical bond strength lies between $3$ and $10~\mathrm{eV}$.

Branched compounds in general do tend to fragment more easily than straight-chain compounds. The reason is simple. If you think about n-hexane, no matter which bond you cleave, you're going to end up with a primary cation (or radical). However, if you cleave at one of the branching points of 2,2-dimethylbutane, you'll get a tertiary cation (or radical). A more stable product means that fragmentation occurs more readily.

1
Why mass spectra of 2-methylbutane do not show big peak at 71 coming from tertiary carbocation?

10
Gas chromatography/mass spectrometry: Can I use peak ratios and molecular mass to derive quantity?
15
Why does 2-chloropropane's mass spectrum have a peak at 27?
1
Why mass spectra of 2-methylbutane do not show big peak at 71 coming from tertiary carbocation?
3
In the mass spectrum of niacin (3-pyridine-carboxylic acid), what ion corresponds to the peak at m/z = 105?
2
Why does neopentane have a higher melting point than n-pentane?
7
Why is a very small peak with larger m/z not considered to be the molecular ion?
2
What do we learn from an isotope peak (or M+2 peak) in a mass spectrum?