Which proton in cyclohexene is the most acidic? 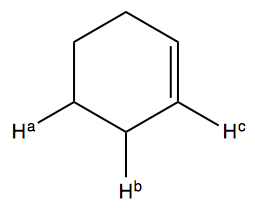 I know that $\mathrm{H^b}$ is most acidic due to conjugation (resonance).

When comparing acidities of protons, we need to find out what the corresponding conjugate bases are.

The conjugate base upon removing $\ce{H_\mathrm{b}}$ is an allyl anion. There is (and should be) no question that it is the most stable carbanion of the three we are going to consider.

In general, lone pairs (and that explicitly includes those coming from anions) want to be in the lowest-lying atomic or molecular orbital possible. Since an s orbital is lower in energy than a p orbital from the same shell, lone pairs prefer s orbitals. If there is no pure s orbital available — as would be the case in practically all carbon-centred lone pairs — an orbital with the highest possible s character is preferred instead. If we look at the configuration $\mathrm{sp^3}$ we can say that it has $25~\%$ s character while $\mathrm{sp^2}$ has $33~\%$ s character. Since $33~\% > 25~\%$, the $\mathrm{sp^2}$ configured carbanion is more stable — which is also supported by corresponding $\mathrm{p}K_\mathrm{a}$ values.

The method outlined above is a very crude approximation building on a high amount of simplifications but gives us the correct result in practically all carbon-centred anion cases.

Note: Ron noted in a comment above that the acidity of an $\mathrm{sp^2}$ hydrogen almost parallels that of an allylic hydrogen. So while most courses may teach this simple ordering, you should keep that in mind as additional information.

Hb is the most acidic hydrogen.

When it is extracted a negative charge appears on the carbon attached to it, this negative charge can then undergo resonance with the adjacent double bond. This resonance leads to stabilization of the system. Therefore the compound would prefer losing Hb.

Hence Hb is the most acidic

When comparing between Ha and Hc, Ha would be the more acidic as when we remove Hc there is a vinylic carbanion that is being formed. And Vinylic Carbanions are very unstable. Thus extricating Hb is more feasible thus making it more acidic.

To check acidity see conjugate base by removing H+. So when you remove H+ from double bond you get a sp2 carbanion which is more unstable than sp3 carbanion. Now as weaker the conjugate base stronger is acid. hence hc>ha. Hope its clear.