Reduction of N,N-dimethylbenzamide with LiAlH4

What will the product be?

According to me the product should be $\ce{C6H5CH2OH}$ but I am not sure. Also, I don't have any reasoning for why this must be the product.

The reasoning is that the lone pair of nitrogen is more reactive because of the two electron-donating methyl groups attached to the nitrogen atom. The electron density is higher on the nitrogen atom than the oxygen atom.

The second reason is that the oxygen anion as a leaving group is much more stable than the nitrogen anion R2N- you would have gotten if the reaction led to your product. 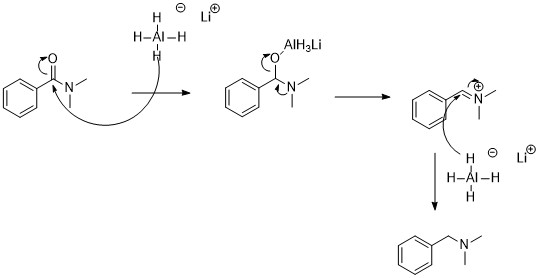 Not the answer you're looking for? Browse other questions tagged organic-chemistry carbonyl-compounds amines or ask your own question.

7
Why does the reduction of a Weinreb amide give an aldehyde instead of an amine?

18
Reduction of carboxylic acids by LiAlH4
5
Reaction mechanism of a terminal alkene with an anhydride
9
Why can't LiAlH4 react with alcohols?
6
Can terminal enols be reduced by using LiAlH4?
8
Reduction of nitrobenzene with LiAlH4 and NaBH4
6
Specific reduction of certain functional groups
5
What is the mechanism for the reaction of alkenes with diborane and chloramine?