How to rationalise the coordination number of CsCl versus NaCl?

Suggest an explanation for the coordination number in the $\ce{CsCl}$ lattice being different from those in $\ce{NaCl}$.

Caesium ion is larger than sodium ion, hence it can be surrounded by greater number of chloride ions.

What happens is that each ion is connected to more ions of the opposite type in $\ce{CsCl}$. Each $\ce{Cs+}$ ion is connected directly to 8 $\ce{Cl-}$ ions, and vice versa. The net effect is that their ratio stays the same, they just have more connections.

Look at it this way: There are four men and four women in a room. First, each man holds hands with only one woman and vice versa. Now, we tell each man to hold the hands of two women, and we tell each women to do the opposite. Now, we shift it up to 3 hands (with the reasonable approximation that humans have an infinite supply of hands), and finally 4. Try this on a piece of paper -- you'll see that the man:woman ratio doesn't need to change as long as the "handholding number" (coordination number) for each person is the same.

Taking a look at the actual lattices: 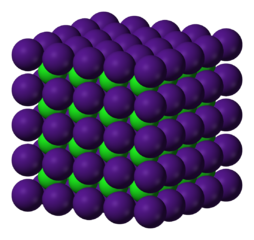 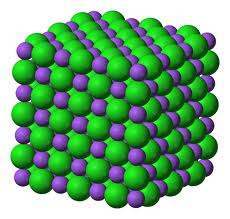 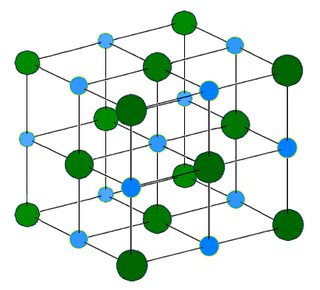 5
Why does water break salt really
0
How can I determine the quantum number of a electron lost during ion formation?
5
Why is the radius of the caesium cation smaller than that of the chloride anion?
3
Stability by using charge/radius rule
1
charge density as a measure of lattice enthalpy & polarizing power?
3
Do superoxide salts of heavier alkali metals contradict the principle that lattice energy depends inversely on cation-anion distance?
1
Why are hydrated lithium ions' radii larger than hydrated sodium ions' radii?