Heat of combustion of stereoisomers of 1-tert-butyl-2,4-dimethylcyclohexane

Which of the compounds below has the smallest heat of combustion?

I know that the heat of combustion is indirectly proportional to the stability of a molecule. And here both $\ce{CH3}$ and $\ce{C(CH3)3}$ are +I groups (inductive effect) but apart from that, I am stuck on how to compare these compounds.

Which of the compounds below have the smallest heat of combustion?

The question is asking, which of these 4 compounds is the most stable. The most stable compound will have the lowest heat of combustion.

It is this last piece of information that helps simplify our problem. Here are the structures of the 4 cyclohexanes redrawn in the chair conformation. 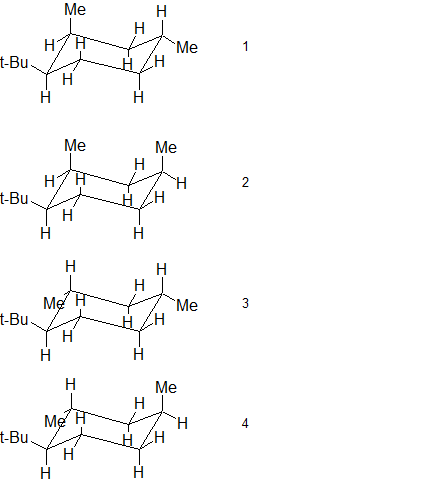 Each structure has the t-butyl group in the equatorial position. Compound 1 has one methyl group in an axial position; this adds 1.7 kcal/mol to the energy of the molecule. Molecule 2 has two axial methyl groups, therefore it is 3.4 kcal/mol higher in energy.

I'll leave molecules 3 and 4 to you to figure out. Once you determine their relative energies, which one of the 4 has the lowest energy relative energy?

Note: There are exceptions to the additivity of A-Values. See near the bottom of this page for a few examples.

Not the answer you're looking for? Browse other questions tagged organic-chemistry stereochemistry heat combustion or ask your own question.