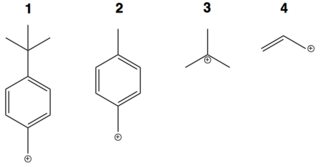 I think that it is clear thatt the first two are more stable than the last 2 as they involve resonance in ring, i.e. the mesomeric effect. Also as the first one has a bigger carbon group attached to it so it will show a larger inductive effect, therefore $1>2$. The third one has a tertiary carbon which is stabilized by hyperconjugation, while the fourthth shows resonance.
As resonance is given more priority the fourth should be more stable, but this doesn't match with the answer.