Will freezing water still expand width-wise in a pipe (possibly breaking it) if it's free to expand lengthwise?

Will freezing water still expand width-wise in a pipe (possibly breaking it) if it's free to expand lengthwise? 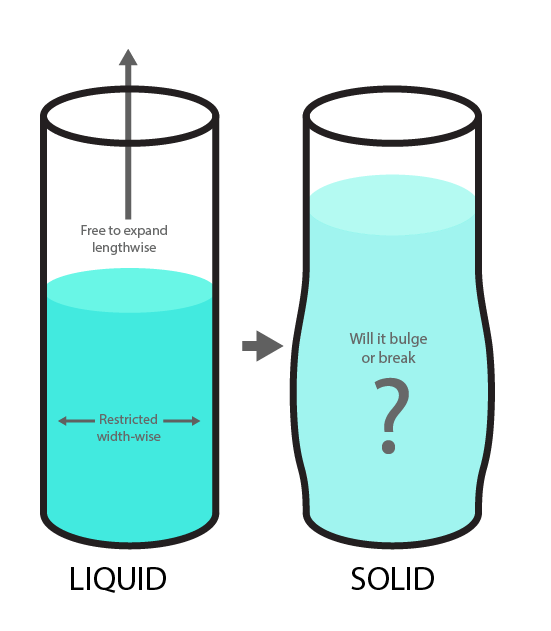 Imagine you have a U-shaped pipe. The two ends are above ground. The pipe runs into the ground for a short length in the middle, then back out again. It's free at both ends but filled with water.

You have a problem there because in cold temperatures, the two above-ground parts are going to freeze first. Then, if it's really cold, the underground part will freeze also. When that happens, the already-frozen above-ground ice won't move and your underground pipe may well go pop. What was initially "free at both ends" became blocked.

Yes, if you do it right and this is indeed a technique used to maintain pipes see: 1,2.

That being said, there are obvious problems when you have two frozen chunks as ice in a pipe is able to withstand significant PSI without moving.

20
Does freezing a solution with water always cause the water to separate and form the ice lattice?
2
Solar still and how it works
2
Is there a substance that would react with seawater to produce a dense, insoluble, nonporous precipitate?
4
How does water freeze and crystallize on a cold superhydrophobic surface?
6
Why is density of water maximum at 4 degree celsius?
0
Gas phase during water sampling