Why is conjugation not possible if there is not present alternate $\pi$ molecules according to MO theory?

I was reading this page at Chemwiki; there they were discussing conjugated-$\pi$ bond.

In order to show that conjugation requires alternate double bonding, they cited the example of 1,3,6-heptatriene:

To be considered conjugated, two or more π bonds must be separated by only one single bond – in other words, there cannot be an intervening sp$^3$-hybridized carbon, because this would break up the overlapping system of parallel 2p$_z$ orbitals. In the compound below, for example, the C1-C2 and C3-C4 double bonds are conjugated, while the C6-C7 double bond is considered to be isolated, due to the effect of the sp$^3$-hybridized C5. 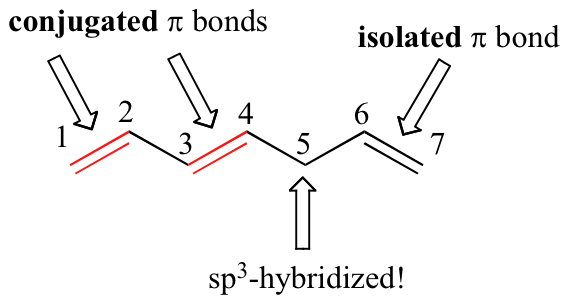 I've a problem with their explanation; firstly are they following MO theory or VB theory? While describing molecules with MO, they, suddenly from nowhere, used the concept of hybridisation. Why?

Can anyone explain only with he help of MO theory why, there needs to be alternate $\pi$ bonding in the molecule for conjugation to happen without use of hybeidisation?

72
Bonding in diatomic C2, a carbon-carbon quadruple bond?
14
Electron density definition of single, double, triple bonds?
15
What utility does the Tau bond model of orbital overlap have?
20
How can the Bonding in IF7 be explained using LCAO method?
33
Hypervalency and the octet rule
4
Is it possible to have accumulation of electron density in the inter-nuclear region even if the overlap integral is zero?
16
Do MO's span a bond or the whole molecule?
2
Bond order of H2O and NH3 using group theory to construct MOs
9
Explanation for bond lengths in trans-hexatriene