During the formation of a molecule of water ($\ce{H2O}$), what kind of bond occurs between the elements? I'm studying this subject on my own and from some sources I saw that there is a covalent bond and others showed an hydrogen bond, responsible for the non-evaporation of water at $-90\ ^{\circ} \rm{C}$. Can you guys explain to me exactly how this bonds behave? Both of them occurs to the molecules of water?

One of the requirements for hydrogen bonding is that the molecule must be polar. Water molecules are polar because of two effects. The first is that oxygen is more electronegative than hydrogen, so each of the OH bonds will be polar. The electrons shared in each of those bonds will spend more time near the oxygen than near the hydrogen. The other effect is the geometry of the molecule: the oxygen atom has two free electron pairs in addition to the two bonds, so it assumes a tetrahedral arrangement. The $\ce{O-H}$ bonds are two corners of that tetrahedron, and the free electron pairs are the other two corners. This arrangement means that, if you only look at the atoms, the molecule has a bent geometry. Because of that, the polarity of the two bonds partially adds together. By contrast, $\ce{CO2}$ has a linear geometry, and the two polar bonds cancel each other out, leaving the molecule non-polar.

Just want to point out that there is a subtlety to the word "water":

Water can mean the molecule, $\ce{H2O}$, and those bonds (between central O and H's) may be covalent.

Water also means the bulk water, many molecules of water. The interactions between two or more molecules is what dictates the bulk properties of a liquid, such as evaporation and freezing. Here we would talk about hydrogen bonding.

Below is a picture of bonding of one configuration of "water" in "water." This is computed from electronic structure theory, and the Quantum Theory of Atoms in Molecules: 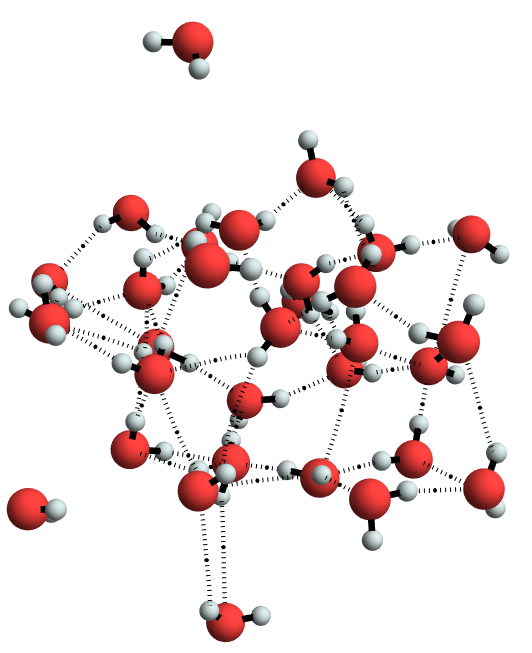 In H2O molecule, two water molecules are bonded by a Hydrogen bond but the bond between two H - O bonds within a water molecule are covalent.

Water is a polar covalent molecule. Take a look at their electronegativity values, Hydrogen is 2.20 and Oxygen is 3.44. This is a difference of 1.24 meaning that it is Polar Covalent. A Covalent bond is present when there is a difference 1.7 +/- 0.5. Also there is Hydrogen Bonding in water also, this is because the hyrdogens will have a slightly psotove charge and the oxygen will have a slightly negative charge, which causes hydrogens in other water molecules to become attracted to the oxygens. I hope this helps

Not the answer you're looking for? Browse other questions tagged bond water or ask your own question.