Interchange of axial and equatorial groups in Me2NPF4 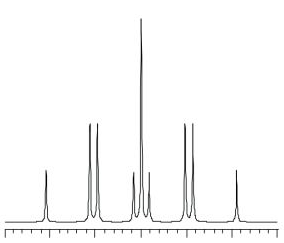 Propose a structure for $\ce{Me2NPF4}$ that is consistent with these observations.

The phosphorus has five groups surrounding it so it must have some sort of five-coordinate geometry. The low temperature spectrum shows a triplet of triplets with similar coupling constants, which is what you would expect from a trigonal bipyramidal structure with two axial and two equatorial fluorines. On this basis I assigned the structure as below: 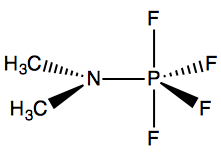 However, I don't understand why all four fluorines are equivalent at higher temperatures. Does this mean that they are constantly interchanging and if so, what is the mechanism for this?

Obviously, in the structure you drew you have two sets of two fluorines which are non-identical: The axial ones that form a 4-electron-3-centre bond with phosphorus and the equatorial ones that are bound by the classical 2-electron-2-centre bond. And also obviously, at higher temperatures this difference vanishes so the fluorines must somehow interconvert into each other (that is the easier explanation when compared to a different structure and is thus preferred by Occam’s razor) rapidly on the NMR-timescale. You noticed this already.

The mechanism for this is called Berry pseudorotation, and it involes a square pyramidal transition state as shown in this image taken from the Wikipedia page:

(The image is drawn with pentacarbonyliron but just exchange iron with phosphorus, four carbonyl groups with fluorine and the fifth with dimethylamine and voilà.)

Since this mechanism involves a significant change in the binding situation (we no longer can write two clearly 2-e-2-c and one 4-e-3-c bond(s)), we need a certain activation energy — that is usually supplied thermally. At $-100~\mathrm{^\circ C}$, there is not enough thermal energy to induce this change; at room temperature there is.

Ben Norris mentioned another important observation in a comment: There is not $^3J_\ce{PH}$ coupling visible. I suspect that this is due to the spectrum actually being $\ce{^{31}P\{^1H\}}$ — a proton-decoupled phosphorus spectrum.

Not the answer you're looking for? Browse other questions tagged inorganic-chemistry reaction-mechanism spectroscopy nmr-spectroscopy or ask your own question.