A Jahn-Teller distortion is predicted whenever a non-linear symmetric molecule has degenerate orbitals and has unequal electron occupation in those degenerate orbitals. Of course, this most often is discussed in the context of octahedral complexes, but it also occurs in other species - it's a general effect.

When I was teaching inorganic chemistry this term, my students asked if this could occur in square planar complexes. My immediate answer was "yes because, of course, there are degenerate MOs:" 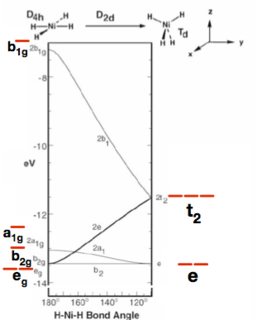 Later, I was trying to figure out what the exact geometric distortion would be. As Wikipedia notes:

Jahn–Teller theorem does not predict the direction of the distortion, only the presence of an unstable geometry.

I consulted the Walsh diagram posted above from Orbital Interactions in Chemistry by Albright, Burdett, and Whangbo.

My initial inclination would be a "scissor" distortion towards a tetrahedral shape since I know $\ce{T_d}$ complexes undergo similar Jahn-Teller distortions.

Based on the Walsh diagram, depending on the electron count (e.g., $\ce{d^3}$ as suggested by the students) it seems as if you would always have a Jahn-Teller distortion predicted, because you would have at least 1 electron in the $\ce{2e}$ orbitals (the structure would be $\ce{D_{2d}}$ as indicated in the figure.

I understand based on LFSE, such complexes wouldn't be stable, but the question remains: Wouldn't it drop down to $\ce{C_{2V}}$ to break degeneracy? If so, how?

Thank you for prompting me to look for square planar complexes that are not $\mathrm{d^8}$; I learnt some valuable stuff while researching the answer to this question! Do take this answer with a grain of salt, because I cannot access the paper I’m referencing here on holidays (I could when I’m back at work) but the supplementaries confirm what I’m trying to prove.

Scott et al. reported the crystal structure of a square planar vanadium(II) complex in 1990. The central vanadium ion is surrounded by the oxygens of four substituted phenolates. A set of two oxygens is also coordinating a lithium ion to give an approximate trigonal planar geometry on the oxygens, and said lithium ions are further coordinated by a THF solvent molecule (again giving a trigonal planar geometry around lithium) such that there is an approximately straight line going through the following atoms: THF-oxygen, lithium, vanadium, lithium, THF-oxygen. I shall define this as the $x$ axis for further discussion; the square planar geometry being in the $x,y$ plane and $z$ being vertical.

I took the atom coordinates of vanadium, the six oxygens, the four oxygen-bound phenol carbons and the two lithii from the supplementary information. My first step was to move the coordinate system’s origin into the vanadium ion. Then I transformed into spherical coordinates and adjusted the axes so that when retransforming back into cartesian coordinates my definitions from above are valid.

The vanadium-coordinating oxygens are slightly displaced from the $x,y$ plane — in sets of two such that one is about as much above the plane as the other is below the plane. This distortion carries through onto their corresponding carbons. The lithium ions are then again almost spot on $z=0$ — also coordinated by one oxygen with positive $z$ and one with negative $z$.

The oxygens do not form a perfect square. Two oxygens are slightly displaced outwards in $x$ direction; two in $y$ direction. The $y$ displacement is almost twice as strong as the $x$ displacement.

The distortion of the square planar geometry resembles the one you predicted: Two opposite oxygens above the plane and two below the plane. This is coherent with a reported $\angle(\ce{O-V-O}) = 162^\circ$ (diagonally across the square).

The authors also reported a large $\angle(\ce{O-V-O}) = 103^\circ$ and a small $\angle(\ce{O-V-O}) = 79^\circ$ all between two neighbouring oxygens and a set of longer and shorter $\ce{V-O}$ bonds differing by $2~\mathrm{pm}$ all in accordance with the slight displacement in the crystal coordinates.

Seen as a whole, the entire thing is indeed en route towards tetrahedral, but also features additional slight distortion that further reduces symmetry from a $D$ point group to a $C$ point group.

The $\mathrm{d^3}$ ion vanadium(II) features a distorted square planar geometry. The distortion seems strong enough to consider a point group of $C_\mathrm{2v}$ around vanadium rather than $D_\mathrm{2d}$.

You can start from either $D_{4h}$ or $T_d$ and use group theory to determine the symmetry of the Jahn-Teller active modes by determining the direct product of the degenerate state term symbol with itself. Only the symmetric portion of that the direct product less any totally symmetric irrep can serve as J-T active mode(s). For $T_d$, the J-T active modes would be $e \text{ and } t_2$ (since $t_2 \otimes t_2 = a_1 \oplus e \oplus [t_1] \oplus t_2$). One component of the e-mode is the "scissoring" mentioned above. Depending on your perspective, this mode is also a distortion toward $D_{2d}$ and then further to $D_{2h}$ symmetry.