Why are geminal diols unstable? [duplicate]

The most stable of:

Carbonyl compounds react with water to give gem diols. This reaction is catalysed by acid. The reaction is reversible reaction. 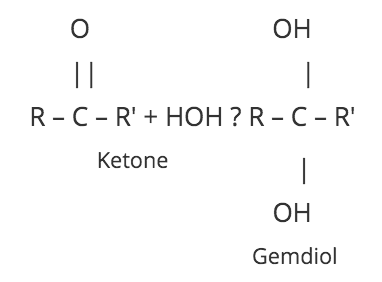 Gem diols are highly unstable compounds hence equilibrium favours the backward direction. The extent to which an aldehyde or ketone is hydrated depends on the stability of gem diol.

Stability of gem diols depend on the following factors:

More is the strength of hydrogen bond more will be the stability of gem diol.

Geminal diols are unstable due to repulsion between the two oxygens present on the same carbon.If a compound is able to disperse the electron pair of oxygens by phenomenon like hydrogen bonding,resonance,-H effect(hyperconjugation) etc,their stability will increase.

26
What makes diazo compounds so unstable and explosive?
5
Why don't periodic acids convert alkenes to 1,2 diols?
6
Why are antiaromatic compounds unstable?
4
Are gem-diols on alkenes stable?
6
Why is formyl chloride unstable while higher acyl chlorides are stable?