The mechanism of demethylation of a quaternary ammonium

The problem is such:

I know that the t-Bu locks the ring in equatorial position as I have drawn out:

Could someone please point me in the right direction as how I can get rid of a Me in the NMe3+ group?

Is it possible that tBuO- is acting as a nucleophile in this case?

The obvious role of tert-butoxide:

The tert-butoxide would obviously rather act as a base than a nucleophile (in-fact under ordinary circumstances we would say that tert-butoxide is a non-nucleophilic base in the same way we refer to LDA).

In order for the tert-butoxide to act as a base, and do the elimination, the conformation of the ring would first have to put both groups axial, which we have already said isn't favourable.

There is an additional reason why this is unable to happen however, since the protons that you need to abstract to get elimination are 1,3-diaxial to the tert-butyl group. This would be highly sterically disfavoured and so is unlikely to happen.

The less obvious role of tert-butoxide:

Since the tert-butoxide can't act as a base, there is the possibility of it attacking one of the methyl groups on the trimethylammonium group to give the product as drawn in an SN2 type reaction. Whilst this seems a little odd, it does have the advantage of neutralising the charges on both the tert-butoxide and the trimethylammonium group to give two neutral molecules. 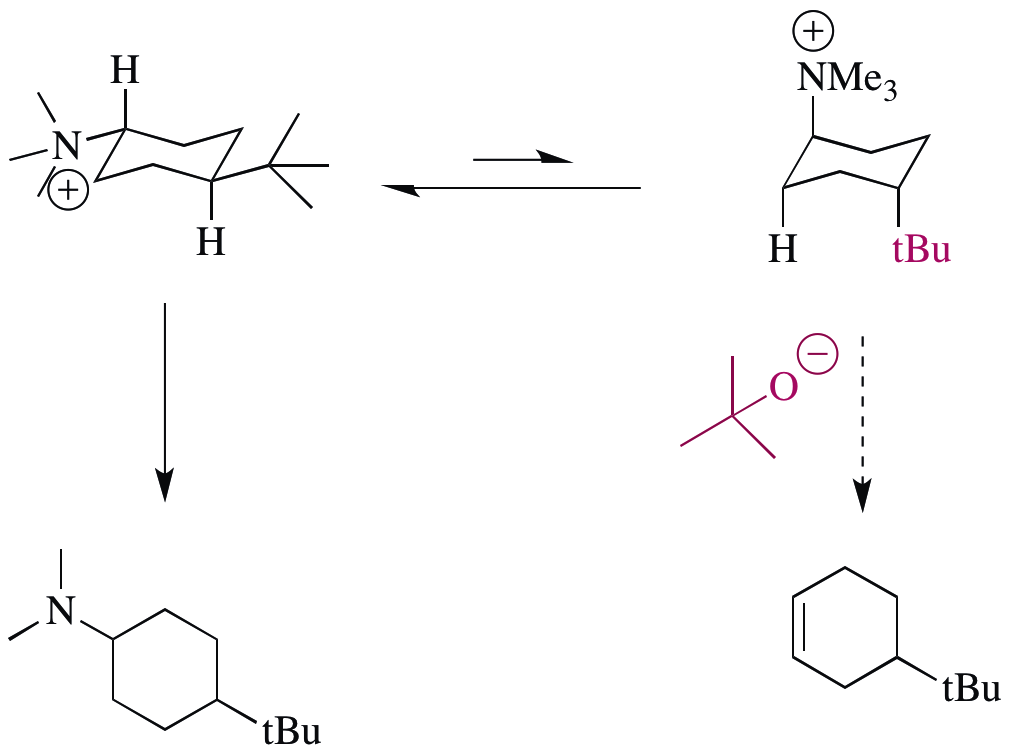 Not the answer you're looking for? Browse other questions tagged organic-chemistry reaction-mechanism amines or ask your own question.

14
What's the mechanism of the reaction of (E)-methyl 3-(furan-2-yl)acrylate in acidic methanol?
4
How does this brominated intermediate lose its methyl group?
1
How to determine the stereochemistry after elimination of anti-1-bromo-2-methylcyclohexane?
7
Which of the following para-substituted benzyl alcohols reacts fastest with HBr?
1
Chair conformations of cyclohexane with two substituents