The approximate stretching frequencies are as follows:

This would seem to suggest that the acid decreases the carbonyl bond strength and the ester weakens it. This must be as a result of the fact that in the ester inductive withdrawal is more effective than resonance and the converse is true in the acid. However, I am finding it hard to reasonably justify why. Presumably this is also linked to the relative electrophilicity of the ester and the acid.

First things first, it's important to realise that functional groups may have IR frequencies over quite a broad range. I've provided the table below, from which you can see that actually there is a great deal of overlap depending upon the actual 'environment' of the functional group in question. Ketones and acids, for example, cover a very similar portion of the spectrum.

That said, the difference between the frequency range of an acid vs an ester is an interesting one, as on the surface of it they are electronically quite similar (in both cases the carbonyl is next to an electronegative oxygen).

@RobChem: This would seem to suggest that the acid decreases the carbonyl bond strength and the ester weakens it. This must be as a result of the fact that in the ester inductive withdrawal is more effective than resonance and the converse is true in the acid.

In your statement, you may have gotten a little confused, remember that the stretching frequency increases with bond strength. Therefore using your data we can say that the ester is stronger than the ketone whilst the acid is weaker.

We can explain the ester being stronger by considering the effect of the electronegative oxygen withdrawing electron density: 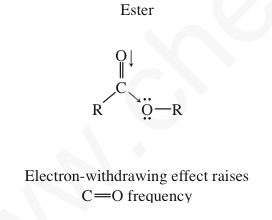 This argument however, fails to explain why the carboxylic acid has a stretching frequency below that of the ketone, since, as was already said, they both have the oxygen adjacent to the carbonyl.

One rationalisation for this is that the carboxylic acid group doesn't exist in isolation but rather interacts with other carboxylic acids in a hydrogen bonding interaction, which weakens the C=O bond:

This hydrogen bonding concept is universal, for instance in methyl salicylate, the C=O bond has dropped to well below that expected for an ester: 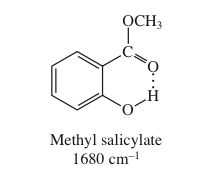 the predominant effect of the oxygen of an ester is inductive electron withdrawal, so the resonance contributor with the single bond contributes less to the hybrid. The carbonyl group of an ester, therefore, has a C-O double-bond character than does the carbonyl group of a ketone, so the former is stronger and harder to stretch. bond in a carboxylic acid has a partial double-bond character that is due to resonance electron donation.

Not the answer you're looking for? Browse other questions tagged organic-chemistry spectroscopy ir-spectroscopy or ask your own question.

18
Why is a ketone more nucleophilic than an ester?
26
Rationalising the order of reactivity of carbonyl compounds towards nucleophiles
14
Why does the carbonyl group in an acid anhydride have two stretching frequencies?
1
Why is the pKa of a ketone higher than of water?
3
Why does an OH bond absorb a higher frequency than a CH bond?
3
Why is the ester carbonyl peak in benzocaine IR spectrum so low?
0
Why is ester more reactive to nucleophile than carboxylic acids?