Is the name of this chemical 3-oxopropanoic acid?

Is the name of this chemical 3-oxopropanoic acid?

I included "oxo"- for the aldehyde group, and "-oic acid" for the carboxylate group.

However, I'm unsure whether this is the correct name since I cannot find it on the internet, while I can find almost all other names I've been trying to figure out. 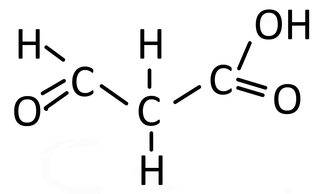 The name ‘3-oxopropanoic acid’ for the compound $\ce{OHC-CH2-COOH}$ given in the question is correct.

Thus, the carboxylic acid group has priority to be cited as a suffix.

Systematic names of carboxylic acids are formed as follows:

Therefore, the preferred IUPAC name (PIN) of the unmodified carboxylic acid is ‘propanoic acid’. (Note that the retained name ‘propionic acid’ may be used in general nomenclature.)

Aldehydes can be systematically named in various ways. Monoaldehydes derived from alkanes are preferably named substitutively using the suffix ‘al’. In this case, however, this method cannot be used since the carboxylic acid group has priority to be cited as a suffix. Therefore, the aldehyde group has to be expressed by a prefix as follows:

Thus, the PIN for the complete structure is ‘3-oxopropanoic acid’.

The corresponding name that is formed by using the prefix ‘formyl’ is ‘formylacetic acid’. Such names are not acceptable as PINs but may be used in general nomenclature.

Furthermore, a special rule for aldehydic acids applies to the given compound:

For the compound given in the question, the PIN of the corresponding dicarboxylic acid is ‘propanedioic acid’.

By way of comparison, for the analogous example $\ce{OHC-CH2-CH2-COOH}$, all three corresponding names are explicitly mentioned in the Blue Book:

3-Oxopropanoic acid (if carbon of aldehyde is numbered, use "oxo" as prefix) is correct IUPAC-name for the given chemical compound.

Formylethanoic acid (if carbon of aldehyde is not numbered, use "formyl" as prefix) is also correct IUPAC -name.

2
Omission of locants for functional groups in IUPAC names
1
Systematic IUPAC names for beta-glucose and lactic acid
1
What is the correct name for 2,4-diethyl-4-ethoxyhexane?
10
What is the preferred IUPAC name of hexamethyldisilazane?
2
Is there another name for compound "delta-7 sterine", does it exist alone?
0
Difference between oxo and formyl
6
How is nomenclature decided in this case (formyl vs oxy)?
6
Does methyl or aldehyde group have higher priority when choosing the main chain of carbonyl compound?