How to determine gerade & ungerade symmetry of a MO orbital?

Now, it can be detected easily which MO, formed due to the overlapping of s-s or p-p orbitals, is gerade or ungerade as shown in these pics: 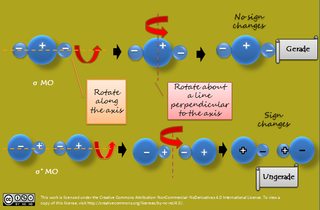 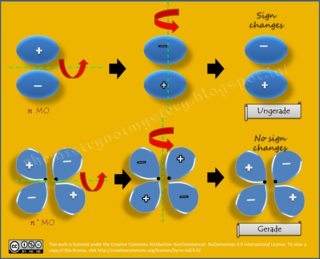 mo due to overlapping of p-d orbitals:

If I rotate about the first orbital about an axis perpendicular to the inter-nuclear axis, the smaller lobe goes to the right only; the sign always remains same; just the position of the lobe has been changed. But in the first picture, only the bonding mo is gerade while the anti-bonding mo is ungerade; I'm not getting how by rotating along the axis perpendicular to the inter-nuclear axis, the sign of the antibonding mo changes making it ungerade.

Can anyone please help me how to apply the procedure for the molecular orbitals formed due to the overlapping of s-p & p-d orbitals?

The better way to do it is to check what happens under inversion ($i$ or $\bar 1$). If the orbital stays the same, it is g, otherwise u.

However, as Orthocresol mentioned in the comments, checking that is only possible if the entire molecule contains inversion symmetry. Not all point groups do, and the vast majority of molecules does not (partly because $C_1$ is likely the most prevalent point group out there).

If opposite lobes have inversion centre i.e. the centre of symmetry with respect to phase of wave functions then the orbitals are gerade otherwise ungerade.

6
How derive g and u symmetry labels for orbitals?
1
Why must the ground state of hydrogen molecule be gerade?

51
How can antibonding orbitals be more antibonding than bonding orbitals are bonding?
5
Can a s orbital overlap with any p orbital to form a sigma bond?
14
Is s-p mixing referring to hybridization or is it the mixing of one atoms s orbital with the other's p orbital?
2
Orbital conservation in Molecular orbital theory
6
How derive g and u symmetry labels for orbitals?