How can three p orbitals per atom bond in tin (II) sulfide?

Tin (II) sulfide, a mainly covalent compound, bonds using its p orbitals only (the 5s orbitals are considered to be part of the core in divalent tin). Its structure is made up of Sn–S–Sn–S chains, which are further stabilized by Sn–S bonding across the chains: 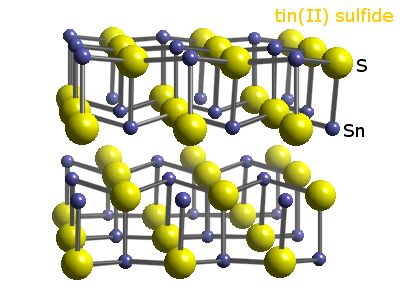 How would VB or MO theory explain the fact that the tin molecule bonds three times, when only two of its p orbitals are half filled (Electron configuration: [Kr]5s24d105p2), while the third is empty? The observed bond angles of ca. 90° (96°/88°) would indeed suggest plain p orbital bonding, as suggested by this paper, but how is this possible?

And how could sulphur bond three times (Electron configuration: [Ne]3s23p4) with similar bond angles, when one p orbital is full?

The only thing that comes up to my mind is a dative covalent (co-ordinate) bond, in which sulphur provides both p electrons, thus permitting coordination. But then, the tin atoms would have a negative charge attached to them (due to having more electrons around than protons) and the sulphur atoms a positive one. Wouldn’t this be energetically unconvenient, considering that the compound has ca. 9% of ionic character, which depends on the tin ions being positive and the sulphur ions negative?

are distinguished by their significant polarity, lesser strength, and greater length

when compared to covalent bonds. This is exactly the opposite of what happens in tin (II) sulfide.

I think your conclusion of a dative bond between sulphide anions and tin cations (assuming pure ionic bonding, which is clearly not the case if you study the image closely) is correct.

Note that the charges you are observing are nothing but formal charges. In a macroscopic picture, tin is still less electronegative than sulphur and the electrons would be considered sulphur’s e.g. when determining oxidation states. The mere fact that an electron pair with correct symmetry is adjacent to an atom is enough to stabilise said atom’s empty orbital.

20
How can the Bonding in IF7 be explained using LCAO method?
1
How does a carbocation have a positive charge?
1
What type of bond(s) are present in the borohydride ion?
7
Do bonding and anti-bonding orbitals exist for ionic bonds?
10
What type of bonding is there among d-block metals?
8
Why is there only one bond length for sulfur hexafluoride?
3
What does "the natural bond angle" mean in the context of Universal Force Field (UFF) potential energy calculation and how are bond angles calculated?