To answer your question, it is good to see the full picture. I used data from the Wikipedia data page on ionic radii to plot the dependence of the ionic radius of dications by the number of d-electrons. The plot includes 1st d-row data for high-spin and low-spin states (these are terms from crystal field theory and are properly introduced elsewhere). It also includes data for Pd-Cd, Pt and Hg. 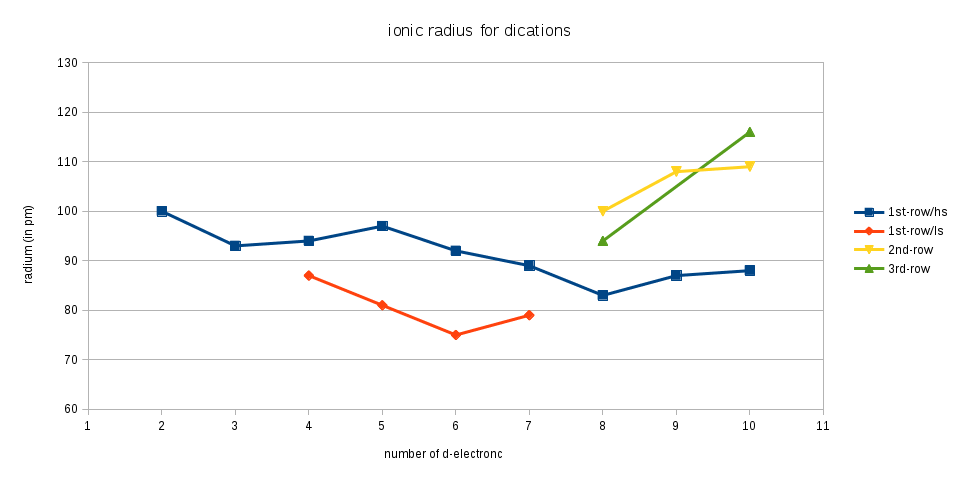 As we can see, a rather complex dependence is observed. However, it is clear, that the increase in ionic radius from the d8 to the d10 state is not a random fluctuation, it is observed for all three rows. To understand the nature of this dependence it is critical to understand that the values are for an octahedral ligand field (the values would be difference for tetrahedral and other coordinations). In such a field d-orbitals become unequal — three of them are lower in energy while two are higher. In high-spin complexes the difference is not enough to overcome electron pairing energy, while in low-spin ones it is. As result, for low-spin complexes we see a clear minimum at d6, corresponding to the three lower d-orbitals being fully filled, while for high-spin complexes we see changes in the trend for the 4th (first on higher orbital) 6th (all orbitals half-filled) and 9th (first paired on higher orbital) electrons. Now, let's check out the orbitals mentioned (thanks to chemwiki)

$\mathrm{d}_{x^2-y^2}$ and $\mathrm{d}_{z^2}$ are the orbitals with higher energy. As it can be seen, they are located between the metal atom's center and the ligands. As such, electrons on said orbitals have clear effect on metal-ligand distance, so for low-spin state the observed ionic radius monotonously descreases up to 6 electrons (fully occupied lower orbitals) and then monotonously increases. For the high-spin state, the increases are also located on steps when an electron is added to higher orbital, but in this case the electrons are added on d4-d5 and d8-d10 configurations, so the increase happens in two steps. For the 2nd and 3rd rows, only few last steps on the curve are observed as most elements in these rows tend to form metal-metal bonds in low oxidation states and thus their true ionic radii are unknown.

And now, why are these dependences of limited use. Consider the graph of $\ce{M-Cl}$ distances for chlorides of the first d-row below. The data was obtained from the open crystallography database. No correlation with the plot above can be established, despite most of the chlorides except for $\ce{ZnCl2}$ having their metal in sixfold coordination. This is because said chlorides are not isostructural. Layered $\ce{MoS2}$ and $\ce{CdI2}$ structures together with chains of squares and 3D-lattices occur. Furthermore, for iron two different structures (layered and rutile-like ones) were found with, obviously, different $\ce{M-Cl}$ distances (the layered one is plotted. As a fun fact, the longer distance is observed in the higher-pressure rutile modification). An obvious conclusion for the plot is that only for isosctructural fragments we can conclude something based on electron structure of the central metal atom. 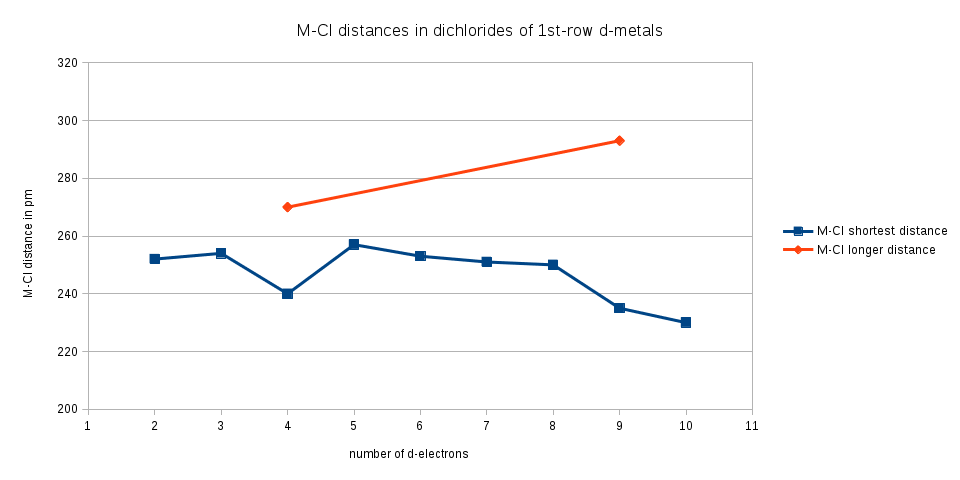 Not the answer you're looking for? Browse other questions tagged inorganic-chemistry electronic-configuration periodic-trends or ask your own question.

65
Why do elements in columns 6 and 11 assume 'abnormal' electron configurations?
4
Why is there a discrepancy among sources on the atomic radius of some elements?

5
Variation in atomic sizes in the transition elements
15
Why Cu+ is unstable in aqueous medium?
2
Regular decrease in the atomic radius of 3d series
6
Why is the electronegativity of indium greater than that of thallium?
0
Confusion in half filled or full filled electronic configuration