Neighbouring group participation with and without retention of configuration in nucleophilic substitution of 2,6-dichloro-9-thiabicyclo[3.3.1]nonane 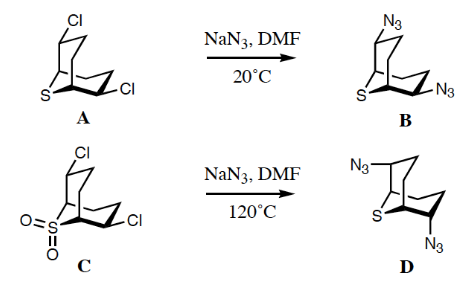 I am having difficulty drawing out the inversion ring product to find out if the s lone pair can attack from anti to the $\ce{C-Cl}$ σ* bond on the vertical ring. If it does, then, there is retention of product in the first reaction after the $\ce{N3-}$ attacks.

Can someone please help using diagrams?

The only difference between substrates A and C is disulfide vs sulfone nature at 9-position. Actually, that is good enough to display this major stereochemical outcome. As explained in Ref.1, the disulfide nature at 9-position of A has an advantage of having two lone pair on sulfur, one of which is proximate enough to attack backwardly on $\ce{C-Cl}$ bond ($\mathrm{S_N2}$ in nature) to give an episulfide ring (see following diagram and the extended comment of ron). The reaction center must have an inversion of configuration since the mechanism is $\mathrm{S_N2}$. 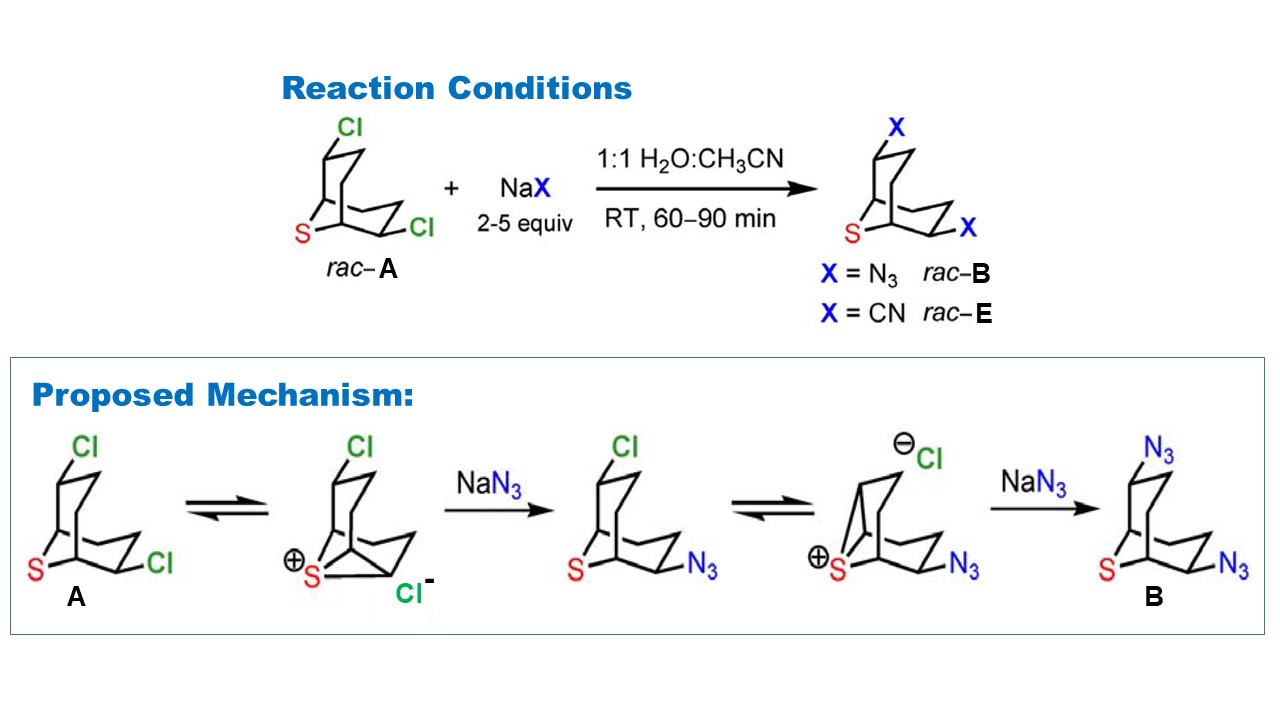 This episulfide intermediate undergoes ring opening backward attack by the intended nucleophile (e.g.,$\ce{N3-}$) to give the final product under 2nd $\mathrm{S_N2}$ mechanism. This stepwise replacement of chlorine by a nucleophile, the first substitution being considerably faster than the second, was first observed by E. J. Corey and E. Block (Ref.2). The nucleophile of their reaction was methoxy group of methanol (solvolysis). However, although they are the first group to suggest the 1,2-epi-sulfonium ion intermediates in these reactions, it was suggested for the initial dichloro compound A formation, not for the solvolysis by methanol. These types of neighboring group participation (NGP; or anchimeric assistance) have been observed previously for bridging carbon, nitrogen, and boron, all for the bicyclooctane series. In mechanistic point of view, this double inversion process preserves stereochemistry in substitution reactions on 2,6-Dihalosubstituted-9-thiabicyclo[3.3.1]nonanes (Ref.3).

Finally, C cannot follow the fast double inversion process due to the lack of a lone pair on $\ce{S}$ bridge, yet undergoes usual $\mathrm{S_N2}$ transformation (slow because the leaving group is $\ce{Cl}$) under the given conditions.

6
How to determine the most reactive hydroxyl group of α-ᴅ-glucopyranose?
4
Deciding more electrophilic centre between ester and thioester for SN type reaction
10
Why does a proton prefer to attack a double bond instead of protonating an alcohol in a reaction of unsaturated alcohol with sulphuric acid?
0
SN2 reactions and inversion of configuration in compounds with more than one chiral centre
1
Ring opening, nucleophilic substitution