'In MO theory, electrons are treated as spreading throughout the entire molecule'- isn't it exhibited in VB theory also?

Two different sources are actually saying the same thing in regard to MO theory: electron density is spread over the entire molecule, okay that is quite right & agreeable.

But the way the fact is presented as if it were the sole property of MO theory. Doesn't the electron density span over the entire molecule in VB theory also?

Check this pic taken from Peter Atkin's above mentioned book: 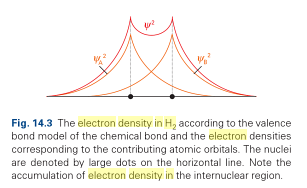 Why is it that the spreading of electron density over the nuclei of the molecules specially in MO theory? Is not this exhibited even in VB theory also? Or am I missing something?

Can anyone please help me whether the spreading of the electron density is the sole property of Mo theory as is put up by the two authors? Is not it exhibited in VB theory also?

In contrast, in VB theory, a bond between atom 1 and atom 2 can only have atomic orbitals of atom 1 and atom 2. The bond between two atoms is then considered to arise from two weakly coupled atomic orbitals. I have to point out though that modern valence bond theory now complements molecular orbital theory and no longer adheres to the valence bond idea that electron pairs are localized between two specific atoms in a molecule but that they are distributed in sets of molecular orbitals which can extend over the entire molecule.