Why only one peak is observed in NMR spectrum of H2?

And if it's true why only one peak is observed in NMR spectrum?

For starters, it is incorrect to think of the ground state being substantially more populated in NMR spectroscopy. Because the energy difference between aligned and misaligned nuclear spins in the external magnetic field is very low, we can say that both states are almost equally populated due to thermal excitation alone. For a $500~\mathrm{MHz}$ experiment, the energy difference can be calculated to be $0.21~\mathrm{J \cdot mol^{-1}}$ which corresponds to a population ratio as follows:

Next, consider the extremely high symmetry of the $\ce{H2}$ molecule: It has the point group $D_{\infty\mathrm h}$, one of the most symmetric ones around. Due to this high symmetry, we cannot distinguish between either proton at all — both can be transformed into each other by a rotation as defined by the point group. Thus, the two nuclei are magnetically equivalent — not only must their chemical shift be identical but also the coupling to the other one.

Now we could still assume that the energy required to excite a nuclear spin whose neighbour is parallel be different from one whose neighbour is antiparallel. However, no matter how we excite, the transition is always $\ce{parallel <=> antiparallel}$. And since we cannot distinguish between the hydrogens, we also cannot distinguish which one pointed in which direction, so those two energies must be identical. Therefore, we only see one peak and no $^1J_\ce{HH}$ coupling.

If by referring to peak you mean a single chemical shift — in low-resolution H-NMR — the number of peaks available on the spectrum would depend on the type of hydrogen environments there are. For example, ethanol ($\ce{C2H6O}$) has three different H environments: $\ce{C\mathbf{H}_3-C\mathbf{H}_2-O\mathbf{H}}$. 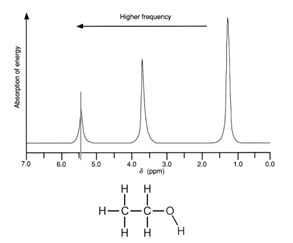 The H's in the two methyl groups are of different environments because one methyl group has its electrons pulled on stronger by the oxygen in the hydroxide functional group ($\ce{OH}$).

In that case, $\ce{H2}$ only has one hydrogen environment, with both hydrogen atoms in the same environment, resulting in a single chemical shift signal.

However, you could have meant the spin-spin coupling determined by high-resolution H-NMR — the one where the tinier individual peaks within a certain signal are visible. The number of tinier peaks that show up for a particular chemical shift is dependent on the number of hydrogen atoms on a neighboring carbon atom.

In ethanol, the hydrogen environment of the central carbon atom ($\ce{CH3-C\mathbf{H}_2-OH}$) would have a quartet (4 peaked) signal because the neighboring carbon has 3 hydrogen atoms. The number of peaks due to spin-spin coupling is = number of neighboring hydrogen atoms + 1

With respect to $\ce{H2}$, the hydrogen atoms have no neighboring hydrogen atoms — there is no carbon in $\ce{H2}$ — so a singlet or single peak would apeak above the chemical shift for $\ce{H2}$. Even if a compound contained carbon atoms, like the H-NMR standard tetramethylsilane $\ce{Si(CH3)4}$ only a singlet is produced because all hydrogen atoms are in the same environment of a methyl group attached to a silicon atom.

26
Why don't equivalent hydrogens cause splitting in NMR?

7
NMR Splitting for Adjacent, Equivalent Hydrogens?
5
Proton NMR Spectrum for Nicotinic Acid
3
NMR sweeping magnetic field
5
How is a NMR spectrum obtained?
1
The type of H-NMR spectra observed for S=PF2H and other inorganic molecules similar to this
1
NMR spectrum chemical shift confusion
3
How can a 90 degree pulse cause precession perpendicular to the applied field in proton NMR