Excuse me if this a dumb question but it has haunted me for years. Back in my old school days I mixed naphthalene, formaldehyde and sulfuric acid in a mad attempt to make $\mbox{2-Methoxynaphthalene}$. I can't remember if I heated the mixture or not.

It turned black instantly and my teacher at school couldn't tell me what had happened, even less why. Did I produce nano-carbon? Just soot? Or something else?

Edit: way back then, I did try the reaction without naphthalene, and also without formaldehyde, with no (noticeable) result. My teacher also repeated the experiment with the considerably more pure chemicals available at the school lab.

Edit2: as of the comment by Loong, what I did was using Marquis reagent on naphthalene. What I found on the net about this was very little and poor. I couldn't even find anything on the color of $\mbox{polymethylnaphthene}$. (Instinct tells me it should be colorless.)

Marquis Reagent (1) is a spot test for alkaloids, first reported in 1896. The original agent was a mixture of 2 drops of 40% formaldehyde and 3 milliliters of concentrated sulfuric acid and was used to detect certain (e.g., opium) alkaloids and distinguish between them. The signature of the alkaloid is both the initial color produced and the sequence of color changes with time. Morphine reacts with Marquis' Reagent to give a purple to violet color. Two molecules of morphine and two of formaldehyde are proposed to condense in the presence of sulfuric acid to the dimeric product which is protonated to the oxoniumcarbenium salt.

The key reaction is protonation of formaldehyde, which attacks an aromatic ring, ortho to the activating phenol group, producing a hydroxymethyl derivative which is immediately protonated and dehydroxylated to give a benzylic cation which attacks another aromatic ring. And it happens again at ortho positions to close a new ring. 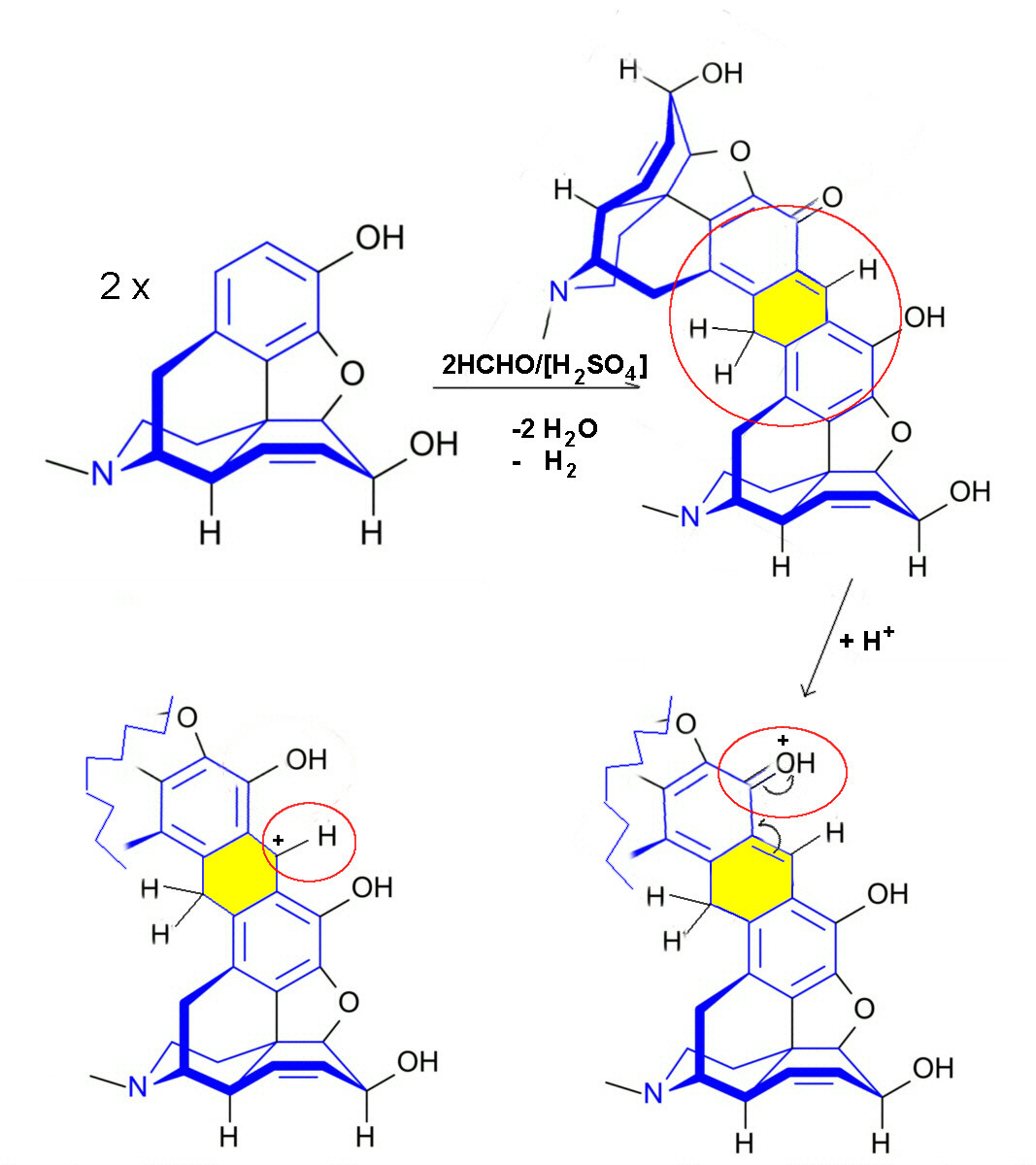 Now the ingredients in your old school days reaction (naphthalene, sulfuric acid and formaldehyde) are used to make what was a common concrete admixture. Kao Soap (2), who made Mighty 150 (“Naphthalenesulonic acid-formaldehyde condensate sodium salt”) offered it to my company. We were making a similar material for paint dispersion and promoted our material for concrete strengthening by water reduction.

The condensate is a polymer and is made by first sulfonating napthalene in the beta position with concentrated sulfuric acid. (The alpha sulfonate is the first product, but quickly rearranges to the more stable beta isomer.) Then formalin, 40%, is added, slowly. The formaldehyde protonates, attacks the alpha position of the (still activated) unsulfonated ring (the sulfonated ring is deactivated), forms a hydroxy methyl aryl group, is immediately protonated, dehydrated and attacks another naphthalene sulfonate in the alpha position of the unsulfonated ring.

This methylene group is the first link of a polymer chain. The other alpha positions (one on each unsulfonated ring) are still open and will be attacked if there is enough formaldehyde. Controlling the amount of formaldehyde added is a method of controlling ultimate molecular weight of the polymer, which affects its dispersing power because of the ability of longer polymer chains to adsorb more strongly and repel other particles without deabsorption of the polymer.

There is a possibility of a runaway reaction in your mixture: the naphthalene is not even sulfonated, so both rings are activated (relative to benzene). If you did get 2-methoxynaphthalene as an intermediate, the sulfuric acid would protonate the methoxy oxygen, generating a benzylic cation, and water and heat of hydration, and a polymer with chains coming out of up to 4 alpha positions per naphthalene. Now the typical naphthalene sulfonate condensates (the acids and the sodium salts) are brown (light to dark), but I could imagine a polymer coming out with a black color.

Not the answer you're looking for? Browse other questions tagged organic-chemistry experimental-chemistry identification or ask your own question.

16
Failed synthesis of aspirin due to excess sulfuric acid
3
Making carbon monoxide gas from formic acid and sulfuric acid?
4
Why does Brady's reagent include sulfuric acid and methanol?
1
What is the possible side product when mixing citric acid, NaCl, Cu, Al, H2O2, and an unknown photoresist?
3
Mixing oxalic acid and glycerin
3
Mixing hydrochloric acid and sulphuric acid, both concentrated
3
Reaction of naphthalene with sodium dichromate/sulfuric acid