Why exception is noted in the solubility of lead salts?

There are many exception in the solubility of lead salts like:

What property of lead causes such type of exceptions?

Lead ion is a borderline acid in the context of hard-soft acid-base theory. Water is a hard solvent. Hard-hard and soft-soft interactions tend to be favorable; mixed interactions are not as favorable. Remember, solvation entails not only breaking bonds within the salt but also creation of bonds between ions and solvent.

Many carbonates are soluble in acid because the acid can protonate the carbonate portion. Singly protonating carbonate ion creates hydrogen carbonate, or bicarbonate, and bicarbonate salts tend to be soluble, likely because of its reduced negative charge density. Doubly protonating the carbonate portion creates a neutral entity - carbonic acid. This is rather unstable and tends to disproportionate to carbon dioxide in water. A common qualitative test for carbonates is to acidify the (unknown) salt and if bubbling is observed, the salt is likely a carbonate salt.

The interesting thing about lead ion is that many of its salts are insoluble in water. This suggests to me that there is a) an especially strong bond between lead ion and its counterions and/or b) an inability of water to effectively solvate lead ion. The latter is discussed above. The former, I'll leave to someone more familiar with the chemistry of metals. 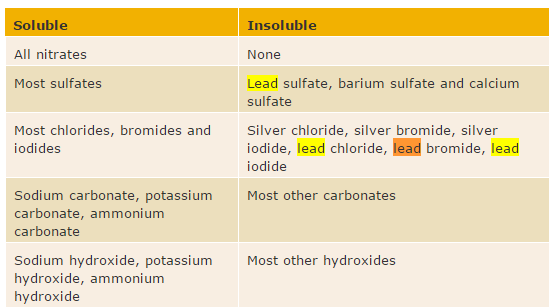 4
Since PbCl2 is insoluble in water, how is it that lead leached from pipes due to Cl- reaction can become ingested?
1
Lead(II)chloride solubility in hot water

2
Are there any safety guidelines for mixing sulfate with chloride?
9
Solubility of gold salt solution?
2
Do (simple, inorganic) salts ionize completely in water when they dissolve?
3
The road to solvation
2
Solubility of Lead in water from leaded pipes in Roman aqueducts
0
Effect of mixing acids on solubility