Stability of alkenes by hyper conjugation

I have learnt that for carbocations, electrons are delocalized from the $\ce{C-H}$ $\sigma$-bond to the empty p-orbital of carbon.

Moreover, alkenes are stabilized by the delocalization of electron from $\ce{C-H}$ $\sigma$-bond to the empty anti bonding $\pi$ molecular orbital.

But, don't electrons in anti bonding molecular orbitals lead to instability? So, how does hyper conjugation lead to stability of alkenes?

I believe this question has already been asked before, but I couldn't find any satisfactory and/or relevant answers.

You are confusing the mixing of orbitals with the promotion of electrons from one orbital to another. You're thinking of this: 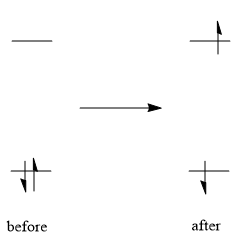 I don't blame you, because the phrasing "delocalisation into an antibonding orbital" implies that, but that is not actually what happens.

In what actually happens, the two original orbitals are said to mix. They cease to exist. They overlap to give two new MOs, one which is even lower in energy and one which is higher in energy, like in this diagram: 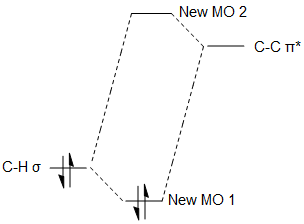 The "new MO 1" has characteristics of both the original $\ce{C-H}$ $\sigma$ as well as the original $\ce{C=C}$ $\pi^*$, which is why we loosely say "donation into the $\pi^*$ orbital". However, don't take it too literally. The phrase means that two orbitals are mixed. It does not mean that electrons are promoted from one orbital to another.

2
Hyperconjugation and the stability of alkenes

7
Hyper conjugation in acetic acid?
18
Orbital correlation diagram for the cleavage of cyclopropylmethylene carbene
11
Why is the eclipsed conformer more stable than the bisected conformer in 1-butene?
4
When 3,4-dimethyl-2,4-hexadiene reacts with HBr what is the major product?
7
Clarification on the $\mathrm{S_N2}$ mechanism
2
The delocalised nature of hyperconjugation