Addition of HOBr across C=C

Looking for interesting problems about addition to C=C, I came across this in the back of Carey. It looks like a simple addition across the alkene, but using HOBr which is something I've never came across in the lab (and perhaps not seen used as an example since I was an undergrad...).

The most obvious way to dissociate HOBr is to lose a proton, leaving the OBr anion behind, Wikipedia confirms this:

[...] hypobromous acid partially dissociates into the hypobromite anion OBr− and the cation H+.

So far so good. And based on this fact, you might expect the product to be as drawn below. However the original literature points towards a different product, also shown below.

Obviously, the product I've drawn as expected looks a little odd, with the unstable Br-O bond present. However, I cannot rationalise how the actual product has formed.

Any suggestions to point in the right direction? Even the name of a rearrangement would be helpful.

The 'expected' product comes from analogy of addition of strong acids like HBr or acid (often sulfuric acid) catalyzed hydration. However, The pKa of HOBr is 8.7 (ref), much lower than those conditions, so it's not reasonable to make that analogy. Put another way, the base in those reactions is an alkene, which is very weak. Only a very strong acid will protonate an alkene.

In some quick SciFinder searching, I haven't found any overwhelmingly convincing evidence for the regioselectivity observed in the product, but it does seem reasonable to me by a mechanism similar to what Aditya Dev suggests.

I look at HOBr as an oxygen with a leaving group (analogous to Br-Br). Attack by the alkene on the oxygen releases bromide and gives the tertiary carbocation. Kick back by the oxygen closes a protonated epoxide, which is analogous to the bromonium. In the bromonium case, these are considered resonance structures. I don't know if that's definitely the case here (oxygen is much smaller than bromine), but I've written it that way to continue the analogy. In any case, protonated epoxides are typically attacked at the site best able to stabilize positive charge, which is the tertiary carbon. The resulting bromohydrin is the 'observed' product.

Traynham and Pascual1 were first to investigate the reaction of hypohalous acids with methylenecyclohexane 1 and that of the epoxide 3 of this olefin with HBr. While both regioisomeric chlorohydrins were reported, only one bromohydrin was obtained, regioisomer 2 (mp.82o-83o). The structural assignments were made without the aid of nmr spectroscopy.

Sisti2 reinvestigated these reactions and provided convincing evidence with the aid of nmr that the structure 2 is the other regioisomer 8 (mp.82o-83o and undepressed mixture melting point). Predictable oxymercuration of olefin 3 led to mercurial 6 which was readily converted to bromohydrin 8 and also reduced with NaBH4 to form tertiary cyclohexanol 7. Preparation of bromohydrin 2 was achieved in part by reduction of bromoester 4 with LiAlH4. The non-ring methylene groups were distinguished by nmr: 2 (CH2OH, δ 3.70); 8 (CH2Br, δ 3.37).

To answer this inquiry properly, it is important to have the correct structure of the product before providing a mechanism for its formation. 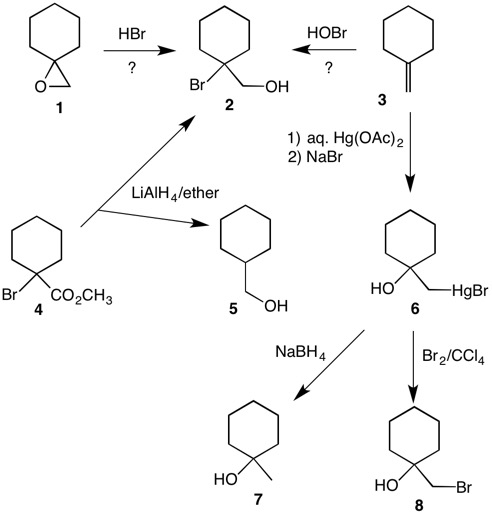 Sorry to dig up an old question but I think some important points are missing:

Also, I wanted to add it's not actually possible to obtain pure HOBr. These species exist in complicated equilibria in aqueous solution. They are known to disproportionate to more stable oxidation states (including bromide) and they exist in an equilibrium with bromine and water. Similar to other electrophilic halogenating agents such as N-bromosuccinimide they supply a small concentration of the molecular halogen to the solution. You can treat this as the reactive entity in your reaction.

3
Ring Formation and Alkenes
0
Syn-addition or anti-addition to fumaric acid?
12
Models for diastereoselectivity in nitronate additions
2
Mechanism of acid-catalyzed addition of water across an alkene
13
Are carbocations necessarily sp2 hybridized and trigonal planar?
18
What exactly is "B-strain"?
9
What is the reason for the exceptional stability of tricyclopropyl-cyclopropenyl carbocation?
4
Selectivity of diazo-coupling with p-amino phenol