Diastereoisomer of quinic acid and its proton NMR?

Quinic acid, A, has the gross structure shown below:

(i) Draw all the possible diastereoisomers of A and indicate which are chiral.
(ii) Quinic acid is optically active and the marked hydroxyl groups are cis to one another; which of your structures is consistent with this data?

Using the $\ce{^{1}H}$-NMR data below, draw a likely conformation for quinic acid, making sure that you fully assign all these data. 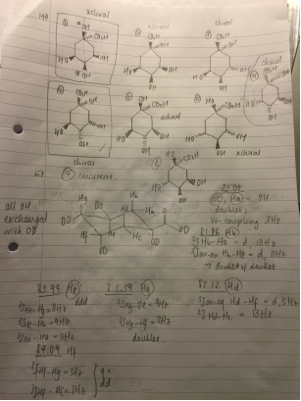 Firstly, have I missed any diastereoisomers? And what does it mean by 'conformation' of quinic acid? Does it mean a chair conformer?

But I'm not sure about the shift at 4.09 ppm since I made the assumption that the quartet is actually a doublet of doublets. Also surely $\ce{H_{f}}$ would vicinal couple with $\ce{OH}$ on the same carbon?

I see one major issue in your working immediately: The NMR has been recorded in $\ce{D2O}$, hence there will be no more $\ce{OH}$ groups present in your molecule, only $\ce{OD}$ groups. Since deuterium is not hydrogen, you cannot observe any coupling to the $\ce{OD}$ groups as if they contained hydrogen.

I made the assumption that the quartet is actually a doublet of doublets.

This is an incorrect assumption. They have multiple dd’s that they reported as dd which gives us less reason to suspect an incorrect report. Note that typical dd signals have two different coupling constants, e.g. the proton at 2.12. Now you could imagine that the two doublets fall together. But in that case, they would fall together to become a triplet, not a quartet. You can try it with splitting trees: Either a dd stays dd, or it collapses into a t. And finally, the quartet cannot be a set of two doublet signals from distinct hydrogens since it only has an integral of 1.

That said, the attribution of different hydrogens to their position in the ring is remarkably simple. Let’s label the quaternary carbon $\mathrm{C1}$ and then go around the ring in any direction. Our first stop is $\mathrm{C2}$.

Since this is a $\ce{CH2}$ group, its chemical shift must be lower than $3~\mathrm{ppm}$. We have two choices. Either we take the two hydrogens that exhibit a $^2J$ coupling or the other two. Since we can easily identify the $^2J$ coupling, let’s take those.

Again it’s pretty simple. The two coupling constants that are not $^2J$ constants must all be present in the hydrogen’s signal. There is only one in question.

Once we have gotten that sorted, we can go back and determine the stereochemistry that must be present here.

We have one very large $^3J$ coupling and one mediocre one. The very large coupling is, of course, due to an axial-axial relationship between the two hydrogens.

There is one coupling constant on the hydrogen at $\mathrm{C3}$ which is not yet assigned and which thus must belong to the coupling to this hydrogen. It’s magnitude again tells us pretty clearly which dihedral angle we expect and thus what the relationship between the two must be.

The coupling constant is rather different this time, indicating the opposite relative stereochemistry. Note that the hydrogen at $\mathrm{C5}$ is reported as a quartet of the same coupling. We’ll get back to that in a second. For now, we know what must be substantially different here.

And now we can move on to $\mathrm{C6}$, the one carbon we are still missing.

As I just mentioned, we have an apparant quartet for the hydrogen on $\mathrm{C5}$. But that’s okay. It just means that there are three rather similar coupling constants to neighbouring hydrogens. One is taken from the coupling to $\mathrm{C4}$’s hydrogen, meaning the two of $\mathrm{C6}$ must be the other two. Thankfully, there is one signal with an integral of two left, which also has the same coupling constant. And also thankfully, if you did everything correctly, there should be no questions as to why this stereochemistry along the $\ce{C{5}-C{6}}$ bond be correct.

Finally, we have a hint in the question as to the overall structure:

Namely that the two hydrogens on $\mathrm{C1}$ and $\mathrm{C4}$ are syn. Thus, the carboxylic acid must be in equatorial position and the hydroxy group axial.

A note on finding the diastereomers: Enantiomers are only enantiomers if all stereocentres are reversed. Thus, if you take one centre and keep it the same all the time and only exchange the direction of the others, you are bound to find diastereomers only. I suggest immobilising the $\mathrm{C1}$ carbon since it is rather prominent up there all alone; it gives the entire thing less hassle. Also, any achiral isomers will always have a plane of symmetry through it which helps, too.