Does a reaction have to have a rate determining step?

I am a bit confused about the concept of the rate determining step. From what I understand, a step in a reaction is the RDS if it meets the following requirements:

Therefore, if there is a catalyst, it means the slowest step in the reaction will no longer be the slowest step because the reaction can take place faster with a different mechanism involving the catalyst. Would it therefore be of any significance to say that a particular step in this reaction, say for example the step with the highest activation energy is the RDS, or is there no point in saying there is a rate determining step, ie, that it does not exist? Is it possible to say that the concept of the RDS has no significance in some reactions?

Any kind of chemical reaction can be modelled as a (complex) network of elementary reaction steps. For instance, if we model the conversion of R to P via the intermediates $\ce{I^1}$, $\ce{I^2}$, and $\ce{I^3}$, we have the following kinetic network:

Note that on the basis of microscopic reversibility, all these reactions can go both ways and the boundary conditions of the system (pressure, temperature and chemical composition) determine in which way and at what rate the reactions occur.

To answer your question: there exists a formal way of identifying the rate-determining step. If we look at the overall reaction rate $r$; then we can define a concept called degree of rate control:

Interestingly, when investigating a lot of chemical systems, it turns out that only roughly half of these systems have a rate-determining step. A lot of the systems (especially in catalysis) have multiple rate-controlling steps and even rate-inhibiting steps (where the DRC coefficient is less than zero).

I will not go too much in-depth, but there exists a complete mathematical treatment and derivation of this theory that shows that the sum of all coefficients has to be unity. This means that a chemical system should always have either a single rate controlling step (the RDS) or multiple rate-controlling steps and possible one or more rate-inhibiting steps.

To conclude: Not every overall chemical reaction has an RDS, but they should have one or more rate-determining steps.

Longer answer: Most reactions have a reaction pathway that consists of one of more intermediates (one or more 'steps'). In these cases, one of the steps is likely (though not necessarily) slower than the others, leading to the concept of a rate determining step (RDS).

The RDS is, as you say, a bottleneck to the reaction. If you imagine the reaction where...

...and $\ce{I -> P}$ is the rate determining step, then no matter how fast you convert $\ce{SM -> I}$, the $\ce{I}$ will just be accumulating until it reacts to form $\ce{P}$ and hence the second 'step' is said to be rate limiting. This can be derived mathematically, but as you are asking the question I assume you're yet to reach this topic yet.

In essence, the $\ce{I -> P}$ rate constant ($k$) dominates the kinetics, making the rate constant for $\ce{SM -> I}$ irrelevant. This simplification is incredibly useful in physical organic chemistry as if we know the rate limiting step, we can think of ways to increase the overall reaction rate by considering how to speed up the slowest step on the reaction pathway.

Catalysts lower the activation energy of a step, allowing it to proceed faster, and in some cases this might mean that the rate determining step is no longer rate determining and some other step along the reaction pathway is. They may do this in a variety of ways, one of which is a change in mechanism (i.e. providing an alternate reaction pathway), when this happens, its not really valid to keep using the same kinetic argument developed for a non-catalytic variant of the reaction, and as such a new rate equation (and hence the rate limiting step) should be developed (if this is important). 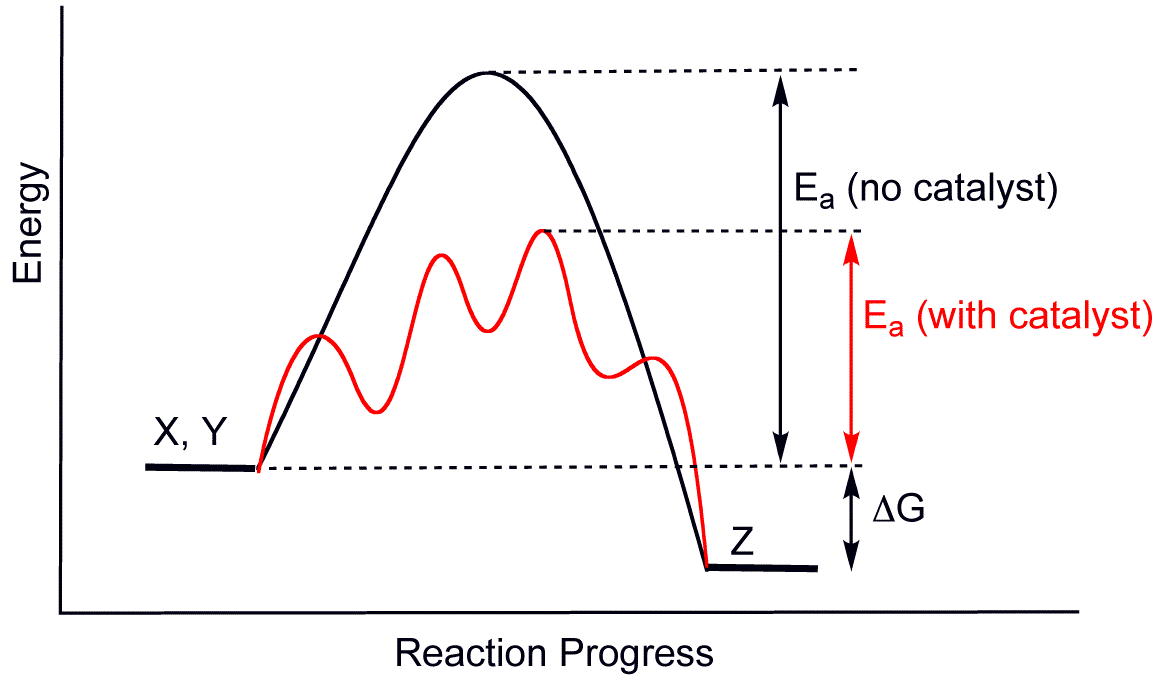 Of course, it is extremely time consuming to measure these kinetic parameters, and even when measured it can be difficult to interpret the data for complex reactions. When we discuss the 'rate determining step' as practicing organic chemists, we are often generalising based on similar systems for which the kinetics have been studied.

There are, however, reactions that occur in a single, concerted step. These are known as pericyclic reactions. All of the bond making and breaking occurs via a single transition state, with no intermediates formed and as such there is no RDS (everything occurs in one step).

A famous example of this is the Diels–Alder cycloaddition:

In addition to contribution of other people.

Usually, there is at least one bottleneck on the reaction path even in case of catalysis. However, it is possible for reactions to form a network with cross-influence. A well known, widely recognized case is Belousov–Zhabotinsky reaction, where intermediates accumulate and, once critical concentration is reached, fall further the path together in a big bunch, following with new accumulation period.

In case of heterogeneous catalysts a reaction still can have a simple path with no weird behavior, but the reaction rate may be determined not by any chemical interaction, but diffusion of reagents towards the surfaces. This is the case of steam conversion of methane.

21
Can in any case the faster step of the reaction be rate determining?
0
Catalytic energy profiles (is this Wikipedia image misleading?)
0
Do SN1 reactions have dependency on the nucleophile?