Why don't free radicals undergo rearrangement like carbocation/carbonium ions do?

Why don't free radicals and carbanions undergo rearrangement like carbocation/carbonium ions undergo in a reaction?

Many common carbocation rearrangements involve 1,2 shifts. If we look at the MO diagram for a 1,2 shift and compare shifting a substituent to an empty p orbital (carbocation, case A in diagram) or to a filled p orbital (carbanion, case B in diagram), we see that the carbocation process involves a 2-electron system whereas the carbanion process is a 4-electron system. The 2-electron process is allowed to proceed themally according to orbital symmetry, but the 4-electron process would need to proceed with inversion of configuration (bonding to the other lobe of the p orbital as we transform from reactant to product) in order to be thermally allowed - and this would be geometrically difficult. 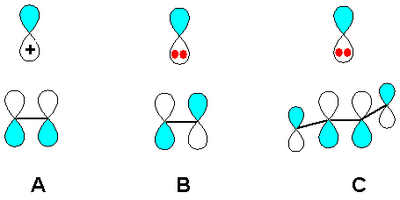 (Source - V8rik at the English Wikipedia via Wikimedia Commons)

Since thermal 1,2 shifts with retention at the migrating center are not allowed in carbanions by orbital symmetry, and a 1,2 shift with inversion at the migrating center is geometrically difficult, such processes would involve higher energy transition states. As a consequence of the higher energy, 1,2 shifts in carbanion systems are less common than orbital symmetry allowed, thermal 1,2 shifts involving carbocations. One might reasonably expect that a radical process would be somewhere in between these two cases; and again the transition state would be of higher energy (since it is not orbital symmetry allowed) making such rearrangements less common.

While radical and carbanion shifts are not as common as carbocation shifts, they do occur. In the case of radicals it requires high temperatures (hydrocarbon cracking) or weak bonds (peroxides for example). Carbanionic rearangements are more common when the carbanion is stabilized. This can be achieved by having an electronegative heteroatom attached to the carbanionic center (as in the Wittig rearrangement) or by placing the anion on an $\ce{sp^2}$ or $\ce{sp}$ hybridized carbon, rather than an $\ce{sp^3}$ hybidized carbon (the Fritsch rearrangement provides an example here).

The short rationale I can provide is that you should consider the transition state for the rearrangement. In the case of hydride shifts in a carbocation, the transition state involves a hydrogen bonded to two carbons with 2 electrons. In a radical, this hydrogen would have 3 electrons. The analogy holds with carbon rearrangements possessing 8 and 9 electrons, respectively. So, we're breaking the octet rule on the migrating group. It is certainly possible to have such a rearrangement, particularly if the migrating group can accommodate an extra electron. For example, phenyl groups can delocalize the extra charge via resonance into the ring, and radical shifts of phenyl rings are well-known.

Not the answer you're looking for? Browse other questions tagged organic-chemistry radicals or ask your own question.

7
Why don't alcohols undergo nucleophilic substitution with ammonia?
3
Why are free radicals so reactive?
5
Why do vinylic carbocations generally not undergo hydride rearrangement from neighbouring sp3 carbon to get more stability?
1
Why do electron donating groups stabilize free radicals?
1
Which is more stable in gas phase, free radicals or ions?
1
why disproportionation of free radicals does not happen in kolbe's electrolysis if we use secondary or tertiary carboxylic salt as substrate?