What does "less hindered hydrogen" mean?

In a book they have given a statement,

In the process of pyrolysis of esters, esters having beta hydrogen are heated at high temperature and then alkenes are formed along with carboxylic acid. If there are two beta hydrogens then beta hydrogen having less hindrance will participate in the reaction.

In the last line, what do they mean by less hindered hydrogen?

Consider these following two structures from the same compound: 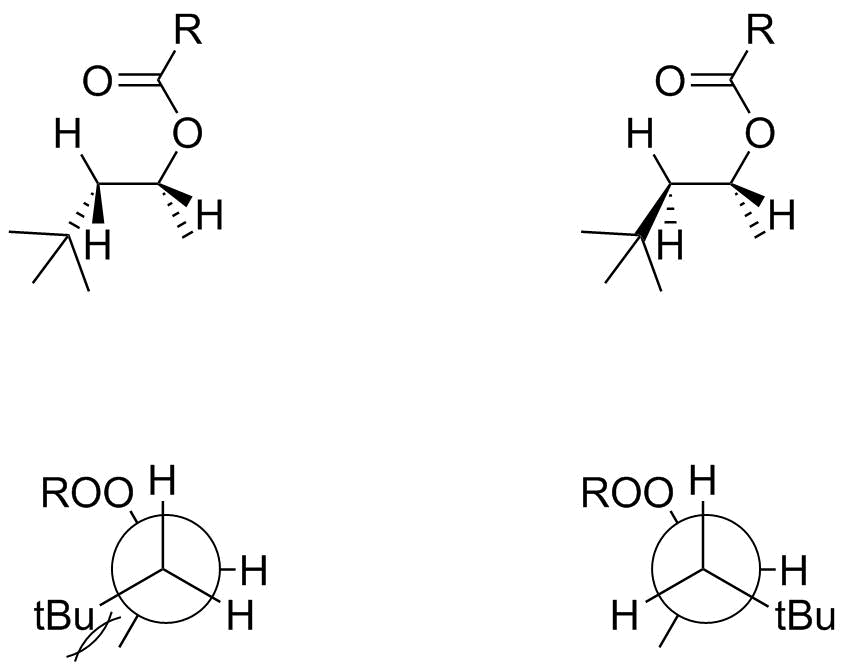 The two Newman projections are along the horizontal $\ce{C-C}$ bond which is, of course, freely rotatable. The two structures represent two possible syn-elimination transition states. Note that in the left-hand structure there is a steric clash between the tert-butyl group and the methyl group. The right-hand structure has no such clash. It is therefore the preferred transition state for this reaction.

The beta-hydrogen with less steric hindrance refers to the beta-hydrogen on the least substituted carbon. Your book is suggesting that the major product is the less-substituted alkene, which is not the most stable product (as pointed out by Jan).

Jerry March's book gives the example of the pyrolysis of sec-butyl acetate. The 'major' product is the less substituted alkene, although it appears to be statistically driven (there are three beta-hydrogens and only two-beta'-hydrogens), indicating that there is little energy difference in the transition states leading to the two products.

All else being equal, the less substituted alkene product (Hofmann's rule) should be predicted to be major. However, it appears that mixtures are typical and other factors must be considered for more complex substrates. The most important of these is that the reaction is a syn-elimination through a cyclic transition state, so the compound must be able to adopt the appropriate conformation. Other steric interactions may also influence the regioselectivity of the product away from the less substituted.

The Wikipedia page is a good summary of these intramolecular elimination reactions.

1
Does the iodoform reaction form hydrogen iodide or water?
20
What does dl- mean in nomenclature
3
Polymerisation of a UV-curing resin
0
If rate of SN1 is more does that automatically mean rate of SN2 is less, and vice versa?
8
Nucleophilicity of sterically hindered enolates