Is methanol more acidic than water?

Is the following reasoning correct? This is my best rationalization; is there anything better or anything that can be added?

The relative acidities of these molecules in the aqueous solution$^{[1][2]}$ is:

The relative acidities of these molecules in DMSO$^{[3]}$ is:

The problem with only considering the acidities of these molecules in aqueous solution is that it assumes only one explanation for acidity. The inversion of the order of acidity in DMSO indicates that there are multiple factors at play.

The acidity trend in DMSO is explained by polarizability and the anionic hyperonjugation effect$^{[4]}$ of the conjugate bases of the molecules. The larger size of the alkyl substituents in the conjugate bases allows for increased distribution of negative charge over a larger volume. This reduces the charge density, and thereby the Coulombic repulsion between the conjugate base and the solvent. In DMSO, water is much less acidic than even methanol, which is also consistent with the relative polarizability of a methyl group and a hydrogen atom, but fails to explain the relative acidity of t-butanol and methanol.

The trend in alcohol acidity is explained by anionic hyperconjugation, which is weakened in larger alkyl substituents.

For methanol and the methoxide anion, the primary interaction occurs between a filled lone-pair ($n$) orbital on oxygen and an unoccupied $\pi^*_\ce{Me}$ orbital of the methyl group, resulting in a two-electron stabilizing effect. 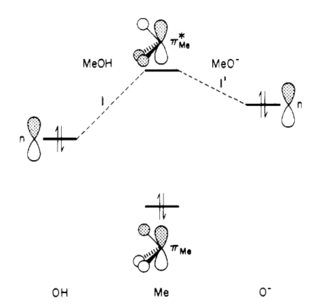 Deprotonation of the alcohol leads to an increase in the energy of the n orbitals on oxygen, and a decreased energy separation between the interacting orbitals $n$ and $\pi^*_\ce{Me}$, and hence a greater stabilizing interaction$^{[5]}$.

Although DMSO does solvate the solute to an extent, because is an aprotic solvent, it is incapable of hydrogen bonding with the solute. This allows DMSO acidities better reflect the intrinsic acidities of the molecules.

In aqueous solution, however, the conjugate bases are stabilized by hydrogen bonding. Because smaller ions are better solvated by water, water's acidity is increased more than methanol's, but because methanol is intrinsically more acidic due to its polarizability, it is still slightly more acidic than water, even in aqueous solution. As the size of the alkyl substituent increases, the alcohol becomes weaker due to the decreasing ability of water to solvate the conjugate base. This has a greater affect on the alcohol's acidity than the dispersion of the negative charge, and overrides the the intrinsic acidity, inverting the order of acidity.

If we compare the +I effect of methyl group and more substituted alkyl groups, then methyl group has less +I effect as compared to other alkyl groups. Since oxygen is more electronegative than both carbon and hydrogen.... So a methyl group cannot fulfill the electron needs of oxygen which is why oxygen takes electrons from Hydrogen and a hydrogen ion is released easily. If a more electron donating group was present it could have fulfilled the electron needs of oxygen and hydrogen ion wouldn't have been released easily thus making the compound less acidic

Not the answer you're looking for? Browse other questions tagged acid-base water or ask your own question.

0
Which one of the two is the stronger base: methoxide ion or hydroxide ion?
-1
Methanol vs water. Acidic strength
1
Why methanol is more acidic than water
13
pKa differences and reactivity
11
Is methanol really more acidic than water?
3
The intrinsic electron-withdrawing nature of alkyl groups
0
How to justify this contradiction in acid-base equilibrium of methanol and water?
1
Water with Sodium VS Alcohols with Sodium
-1
Who makes a better nucleophile? CH3O- or OH-?