Interpretation of 1H-NMR spectra for Z-ochtodenol 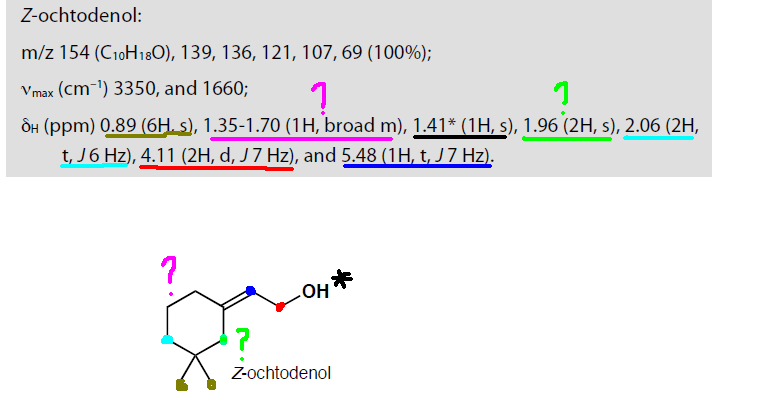 I'm struggling to understand the 1H-NMR data for this compound. I managed to find the compound using the data I had, but at the end I can't assign the peaks properly.

organic-chemistry nmr-spectroscopy erratum
Share
Improve this question
edited May 9 '19 at 1:07

Let’s get the obvious out of the way first: Yes, the light blue protons should probably be the allylic ones since their shift is so similar to the other allylic protons’ shifts. (The green ones, that is; the red ones also experience deshielding from their neighbour oxygen.)

Then also, the report of the spectrum has been done badly. It should have included the field used. It makes a big difference if a spectrum is measured at $90~\mathrm{MHz}$ or at $700~\mathrm{MHz}$ — it may well be that weaker couplings are unobservable in lower field spectra but clear in higher ones. If I had to guess, I would assume a rather weak magnet since the smallest coupling reported is $6~\mathrm{Hz}$ — and they don’t even include a further significant figure.

Therefore, concerning your first bullet point: It is entirely possible that those protons do couple only the spectrum had too low a resolution to show it. However, remember that coupling should always be considered a possibility. If you check out the Karplus curve, you will see that for an angle of $\approx 90^\circ$ vicinial coupling effectively becomes zero. Same things may happen with long-range couplings: They may be absent with no apparant reason to the organic chemist since we cannot see the molecule’s exact orientation.

A ‘broad multiplet’ makes no sense to me whatsoever. In my opinion, multiplet alone should be enough. And I also strongly suspect an error in the book here: That is the shift where the four missing question-marked hydrogens should appear at. They should have badly overlapping, possibly even complex spins since each one is magnetically unequivalent and we are dealing with a cyclohexane system. This line should be, in my opinion:

And that also explains why three protons are missing. The pink ones are the only ones that would allow more protons in the same spot.

All in all that last bit is an error that really shouldn’t have happened in a textbook exercise. I do hope there is an erratum somewhere.

Based on an old comment from NotEvans, it turns out that the reported NMR data is from the end-of-chapter problems of Organic Chemistry 2ed, Clayden et al. (Problem 11, Chapter 18). These can be accessed online using the username and password provided in the front cover of the textbook.

There is an erratum in this data; the "broad multiplet" should integrate to four protons, not one. This is not officially corrected in the published list of errata, but is sufficiently obvious that I am willing to go on record to say it is a typo.

In my experience, allylic couplings can sometimes be difficult to resolve, unless you manipulate the spectrum (e.g. with a suitable apodisation / window function). So, the lack of allylic coupling in the data shown above is not entirely surprising.

With this knowledge in hand, the spectral data can be reasonably easily assigned, and is handled admirably by Jan's answer.

However, there is something that I wanted to comment on, and it is that counter to intuition, small couplings (e.g. allylic coupling, ~1.5 to 2 Hz) are typically easier to see with lower field strength, not higher. It's because if you want to cover a spectral width of 20 ppm at 600 MHz, that corresponds to 1200 Hz (vs 400 Hz at 200 MHz). If all the experiment parameters are kept the same, the digital resolution (in terms of Hz per point) at 600 MHz is 3 times poorer than at 200 MHz.

This might not be the most instructive example, but I am not particularly bothered to find a better one. This is a methyl group which is displaying one large coupling ($^3\!J$) and two small couplings (one $^4\!J$ and one $^5\!J$). You can see that the resolution is ever-so-slightly better in the 400 MHz spectrum. Both spectra were acquired with the same spectral width (20 ppm), the same number of points in the FID (64k), and no zero filling has been applied. As a result, the digital resolution in the 500 MHz spectrum is 1.25 times worse (0.32 Hz vs 0.24 Hz for the 400 MHz). 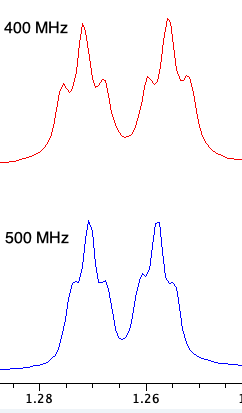 Not the answer you're looking for? Browse other questions tagged organic-chemistry nmr-spectroscopy erratum or ask your own question.

5
How do I find out what benzene containing compound this is with IR and NMR?
9
1H (proton) NMR spectra for alkanes
4
How to explain two NMR spectra of the (allegedly) same compound with slightly different shifts?
19
Multiplet shape in proton NMR of morpholines
5
How does the presence of various NMR active nuclei in a compound affect coupling and signal multiplicity?
4
The carbon-13 NMR for 1,1,1-trichloroethane